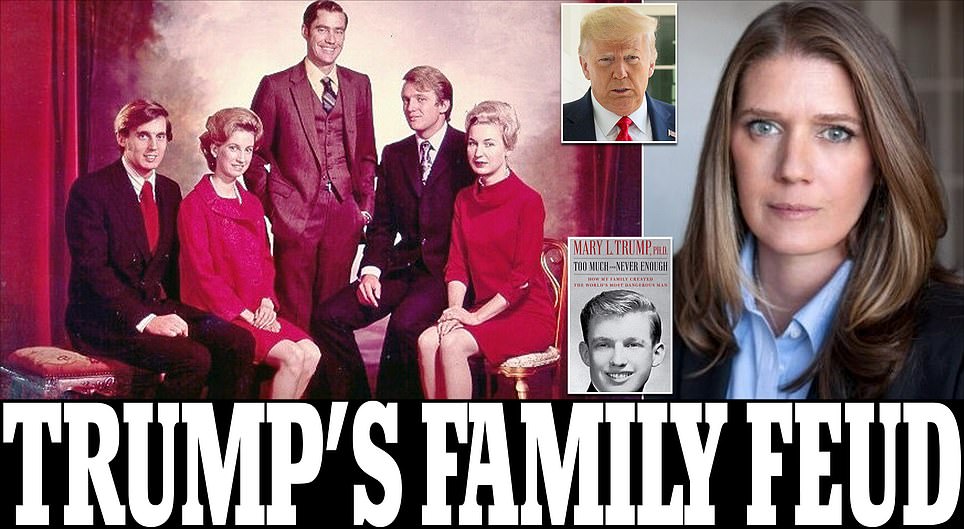 Donald Trump is looking to sue his niece Mary after she announced plans to publish a no-holds-barred memoir on the president’s family, according to reports.

Mary Trump, 55, will release ‘Too Much and Never Enough: How My Family Created the World’s Most Dangerous Man,’ on July 28, according to Simon & Schuster.

Her uncle Donald is now looking into legal action amid reports she signed a non disclosure agreement in 2001 banning her from talking about their relationship, according to The Daily Beast.

The book marks the first time that a member of Trump’s family will publish unflattering stories about the former real estate tycoon and reality TV star.

Mary is the daughter of Fred Trump Jr, the president’s older brother, who died in 1981 at age 42 due to complications from alcoholism.

The 240-page book will detail events she witnessed as a child while spending time at her grandparents’ house in New York’s Queens borough, where her uncle and his four siblings grew up.

‘She describes a nightmare of traumas, destructive relationships, and a tragic combination of neglect and abuse,’ Simon & Schuster said in a blurb about the book.

The president is said to have been briefed by his lawyers but it is not yet clear what action, if any, he will take.

The United States government on Tuesday sued former National Security Advisor John Bolton, accusing him of breach of contract and claiming that publication of his book would unlawfully put out classified information.

A lawsuit, filed by a U.S. attorney in Washington, D.C., follows up on a threat leveled by President Trump that his former aide would experience ‘criminal problems’ if he went ahead with his tell-all.

The book claims Trump is willing to ‘endanger or weaken’ the U.S. to get reelected.

But it is not clear from the suit that DOJ would force a stop in publication. It claims Bolton violated non-disclosure agreements not to reveal classified information, but also lays out a lengthy review process the government failed to complete.

The Justice Department is asking the court to ‘instruct or request’ that that his publisher delay publication, allowing for the completion of a standard security review that has gone on for months.

Sam Nunberg, a former political adviser to Trump, told The Daily Beast the president ‘would be more upset about’ Mary Trump’s book than Bolton’s.

He added: ‘It’s about family, it’s a personal betrayal. The president has dealt with disgruntled past employees saying things and criticizing him. But in all my research—and I’m very well read on the Trumps—I’ve never seen something like this.’

Mary Trump, a clinical psychologist, will say that the president, despite being his father’s favorite son, ‘dismissed and derided him’ when he began to suffer from Alzheimer’s.

In the book, she explains ‘how specific events and general family patterns created the damaged man who currently occupies the Oval Office,’ the publisher said.

It will include ‘the strange and harmful relationship between Fred Trump and his two oldest sons, Fred Jr. and Donald,’ the blurb adds. Fred Trump died in 1999.

‘She alone can recount this fascinating, unnerving saga, not just because of her insider’s perspective but also because she is the only Trump willing to tell the truth about one of the world’s most powerful and dysfunctional families,’ it concludes.