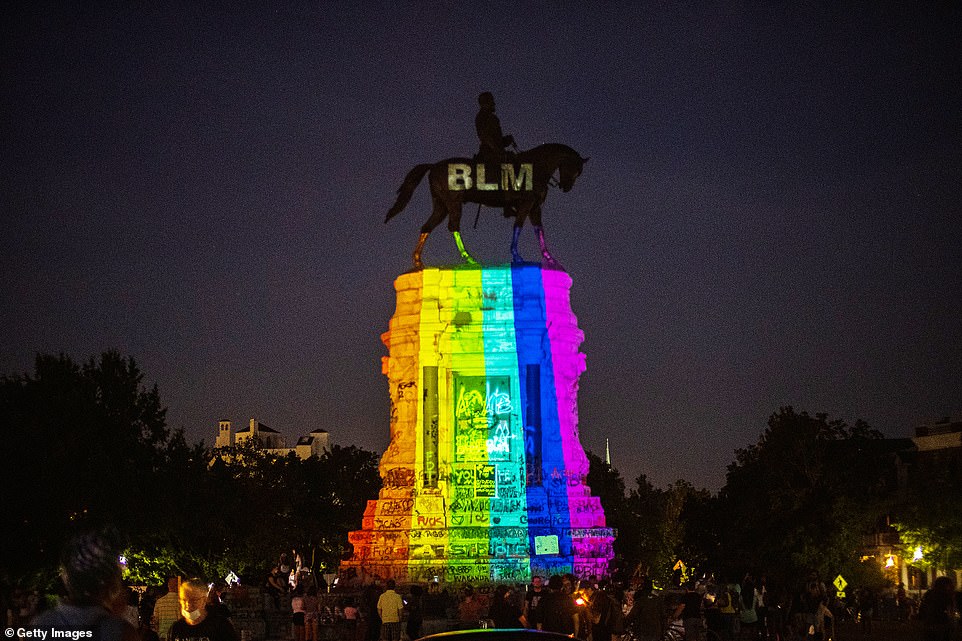 Black Lives Matter activists in Richmond, Virginia, projected the LGBTQ rainbow flag as well as images of African Americans killed by police including George Floyd on to the statue of Confederate General Robert E. Lee.

The statue on Monument Avenue in Richmond, in which Lee is depicted on a horse, has been the site of massive protests since the May 25 police-involved killing of Floyd.

Black Lives Matter activists projected the ‘BLM’ letters onto the statue on Friday. The LGBTQ pride flag as well as prominent black activists including Angela Davis and Malcolm X were also projected onto the monument.

Floyd, a 46-year-old African American man, died in the custody of Minneapolis police.

Four officers, including one who was seen kneeling on his neck for nearly nine minutes, have been charged over his murder.

Floyd’s death ignited worldwide protests as millions took to the streets calling for racial justice and an end to police brutality.

The incident also reignited the debate over the future of Confederate statues and monuments as well as other memorials for controversial figures in American history who owned slaves.

Democratic Governor Ralph Northam last week ordered the removal of the 12-ton, 61ft-high equestrian statue of Lee, the most revered Confederate of them all, but a judge on Monday blocked such action for at least 10 days.

The spokesman for the Virginia division of the Sons of Confederate Veterans, B. Frank Earnest, condemned the toppling of ‘public works of art’ and likened losing the Confederate statues to losing a family member.