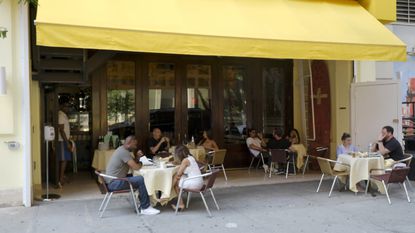 Stir-crazy party animals may ruin the city’s planned reopening for the rest of us.

Areas including Manhattan and the Hamptons where businesses have been widely reported for violating social distancing rules could see their reopening plans “reversed,” Gov. Cuomo threatened Sunday, even as Saturday marked the lowest number of new COVID-19 deaths in the state since the peak of the nightmare in April.

The state has received a whopping 25,000 complaints about establishments that are serving customers and allowing drinking on the streets, he said, noting Manhattan and the Hamptons are “leading areas in the state with violations.”

“I am warning today in a nice way: consequences of your actions,” Cuomo said at an Albany press conference, noting businesses can lose their liquor licenses for breaking social-distancing rules. “We have 25,000 complaints statewide. I’m not going to turn a blind eye to them.”

The threat came as social media have been flooded with photos of revelers congregating in Greenwich Village, the Upper East Side and Hell’s Kitchen — areas that typically draw diners and drinkers. The images depict city residents letting off steam after nearly three months of lockdown orders in which bars and restaurants have been prohibited from serving customers on their premises.

Huge crowds were seen drinking outside bars at St. Mark’s Place through the weekend, with many people shunning masks and social-distancing rules tossed out the window. The throngs were so big, they spilled out into the street, forcing cars to drive by at slow speeds.

“It was pandemonium,” resident Derek Karpel, 40, told the Daily News. “There are some people that are just stupid.”

But by Sunday afternoon, there were just a few small groups hanging out in the area, including Ellen Jordan, 38, and four masked friends who were drinking cocktails from plastic bags.

“You have to be careful if you’re having a million people on the street and they’re not actually wearing masks,” she observed. “If someone is getting super drunk, the first thing that happens is the mask comes off.”