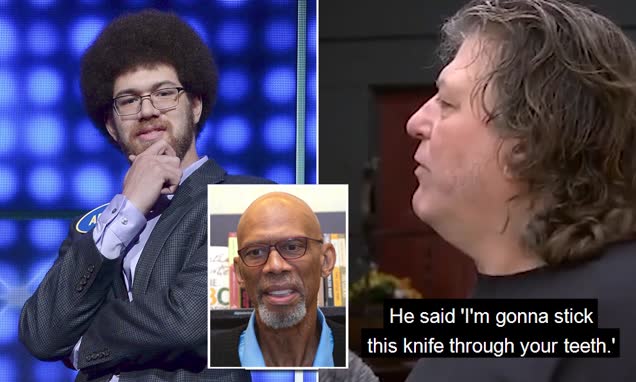 Rachel Winsor, 26, grew up playing with Adam Abdul-Jabbar, 28, in the California neighborhood where the attack took place. She said she is terrified the Lakers’ legend’s (inset) son will launch a fresh attack on her father after the suspect was released on $25,000 bail. Abdul-Jabbar allegedly went to the victim’s home to apologize the next day as soon as he was released. The victim, Ray Winsor, 60, (right) broke his silence over the attack saying Abdul-Jabbar (left) yelled ‘Shut your f**ing mouth, I’m gonna stick a knife through your teeth’ before he stabbed him seven times. Winsor said he has known the basketball star’s son since he was a child and that the two were arguing over trash cans because he felt Abdul-Jabbar was not doing enough to help the 83-year-old lady who he lives with. Abdul-Jabbar was arrested and charged with assault with a deadly weapon after the incident Tuesday.