Karen González on in Search of the ‘Good Immigrant’ 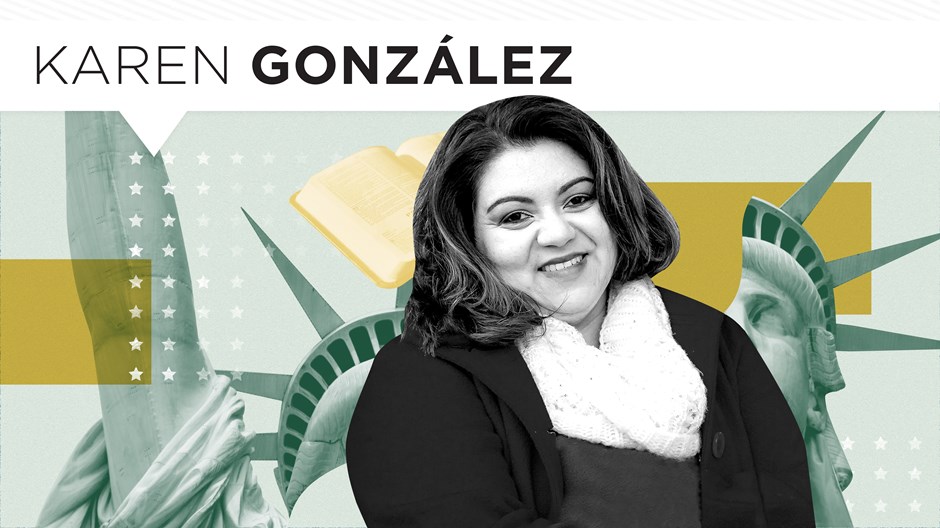 Karen González is a speaker, immigrant advocate, and the author of The God Who Sees: Immigrants, The Bible, and the Journey to Belong. Find her on Twitter and Instagram @_karenjgonzalez.

I am not a good immigrant. I don’t know any good immigrants. Good immigrants, according to our American mythology, work hard and keep their head down. They assume the necessary risks to keep our economy running during a health pandemic, and they don’t complain about being blocked from public benefits our economy affords or being excluded from CARES Act stimulus payments.

Good immigrants are eternally grateful for admission to this great country and never critique it. They speak English fluently and are fully assimilated into American culture, forgetting the old country except in the occasional nostalgic moment or holiday. They are so law abiding as to be above reproach. In short, they are shining examples of what it means to be an American.

Above all, good immigrants find a way to be legal immigrants, never mind an ever-shifting immigration system that favors some, marginalizes others, and strands many in a world of loopholes and technicalities. They would separate from their families, even see their children suffer, before they would cross a border without papers.

I used to aspire to this mythical and impossible level of perfection. Not only did it keep me from living fully into my identity as a child of God who bears the image of God, but it also kept me from seeing my own immigrant family and neighbors through the lens of the gospel. Instead, I demanded this impossible standard from them as well, evaluating them through the same rubric of worthiness used to evaluate me.

In simple terms, my aspirations for “good immigrant” status drew me away from the gospel, not toward it. We often run into problems, biblically speaking, when we label people as “good” or “bad”—immigrants included.

I migrated from Guatemala in the 1980s and have fought to preserve my first language and culture while integrating into American society. I am an image-bearer of God with flaws, struggles, and habitual sins. I often speed on the highway and have earned my share of parking tickets as a city-dweller. I get angry and frustrated with US laws that harm people, and I have taken part in protests. I collected unemployment for a season.

Our own history suggests that good immigrants, as we imagine them, were few and far between. Those who arrived in earlier centuries did not migrate to become “good Americans” but to replicate the best of their old country in a more favorable environment. They were often slow to learn English and integrate into American society. That is why we have New England and Pennsylvania Dutch Country, and why many cities have Little Italy and Chinatown.

Early immigrants didn’t think of themselves as “legal” or “illegal,” because that language wasn’t part of the national vocabulary. There was no mechanism to enforce the few immigration laws that existed, and newcomers came across our borders with ease, often without even an interview. For most of American history, our borders were, effectively, open borders.

The uncomfortable truth is that immigrants have changed little. Immigration laws and enforcement have changed a lot.

Followers of Christ can turn to their Bibles to find stories of imperfect immigrants, saints seeking to live as faithfully as they can in a land that is not their own.