Donald Trump claims he’s done more for the black community ‘than any other president’ and says Abraham Lincoln ‘did good, although it’s always questionable’ 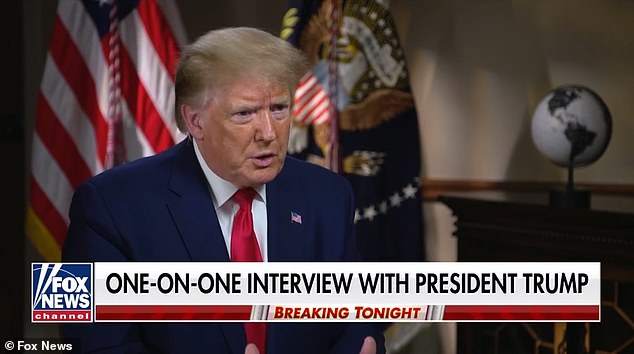 President Trump said that he’s done more for the American black community than any president, though he suggested Abraham Lincoln’s slave-freeing status made that president unrankable.

‘I think I’ve done more for the black community than any other president,’ Trump told Fox News Channel’s Harris Faulkner in an interview that aired Friday. ‘And let’s take a pass on Abraham Lincoln, because he did good although it’s always qustionable, you know, in other words, the end result.’

It was unclear, exactly, what result Trump was talking about, though Faulkner, who is black, responded, ‘Well, we are free, Mr. President. He did pretty well.’

‘We are free,’ Trump said back. ‘Well, you understand what I mean? You know, I got to take a pass on an Honest Abe, as we call it.’

Faulkner then probed Trump on how he’s ‘done more than anybody.’

The president pointed to the bipartisan criminal justice bill he signed.

‘And I got five or six Republicans Senators who had no interest in getting it done,’ Trump reminded Faulkner.

The president also pointed to getting prolonged funding for historically black colleges and universities.

The president had made similar comments about Lincoln previously.

On June 2, when the nation was in the throngs of the protests over George Floyd’s death, he tweeted that he came in second place after Lincoln in helping black Americans.

‘My Admin has done more for the Black Community than any President since Abraham Lincoln,’ the president tweeted. ‘Passed Opportunity Zones with Sen. Tim Scott, guaranteed funding for HBCU’s, School Choice, passed Criminal Justice Reform, lowest Black unemployment, poverty, and crime rates in history … …AND THE BEST IS YET TO COME!’