Thousands of Police Officers Are Taking a Knee. Will It Make a Difference?

The scene was repeated this week in city after city.

As thousands of people demonstrated against the death of George Floyd, the 46-year-old Minneapolis black man killed in police custody, police officers and other law enforcement agents took the knee in a symbol of solidarity with protesters.

From Boston to Spokane, Washington, scenes of officers dropping to their knees — often accompanied by cheers — made for dramatic headlines and images.

The gestures were intended to show support for the protests and to underscore officers’ humanity in the face of ongoing police brutality, of which Floyd was the most recent example.

But the gesture of officers taking the knee in the midst of a national upheaval over race and police brutality is fraught.

In Christianity and Islam, kneeling is a sign of veneration — meant to express devotion, humility and supplication toward God.

“It’s a sign of reverence,” said Luke Bretherton, professor of moral and political theology at Duke Divinity School. “We get our grammar of it from religious frames of reference.”

Catholics kneel during Mass. Muslims bow, kneel and place their foreheads to the ground during salah prayers. Jews bend the knee and bow during the Aleinu prayer.

In secular settings, it’s a sign of respect. A person may take the knee to propose marriage. A soldier may take a knee at the grave of a fallen fighter. 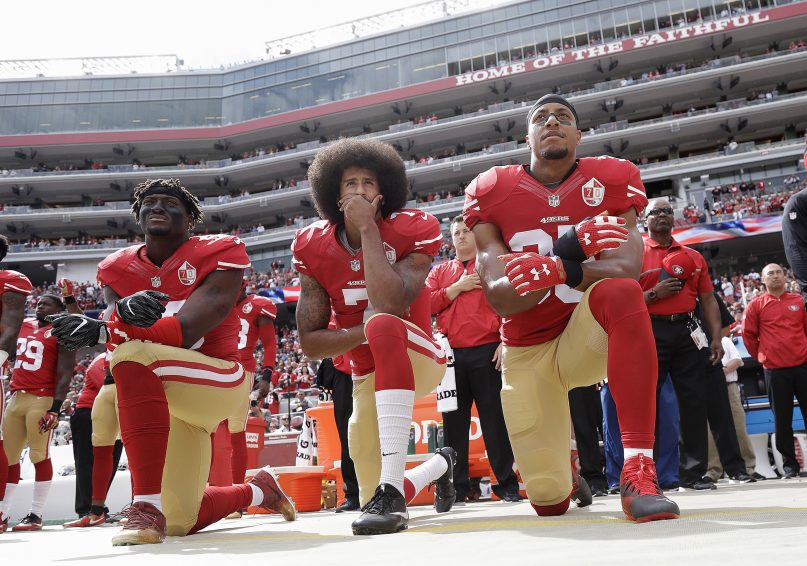 That’s what Nate Boyer had in mind when he convinced former San Francisco 49ers quarterback Colin Kaepernick kneel during the national anthem as a way of protesting police brutality. Kaepernick had previously been sitting on a bench during the anthem.

But the following year, President Donald Trump began attacking players who took the knee, saying that kneeling was a form of disrespect for the U.S. flag and anthem, especially when others were standing.

NFL owners eventually ruled that players could no longer kneel during the anthem without being subject to punishment.

But now police officers,  police chiefs, mayors, U.S. senators, even a Catholic bishop, have adopted the gesture as their own way of showing contrition and solidarity with protesters’ anger over the death of Floyd.

“All police officers don’t think the same,” Boston Police Officer Kim Tavares told a reporter for WCVB. “Black lives do matter. When you have stuff like this, you still have to show them love.”

But the optics of police officers on their knees is not entirely welcome. As sportswriter Sally Jenkins pointed out, the knee is the very anatomical joint Officer Derek Chauvin used to pin Floyd on the ground and choke him.