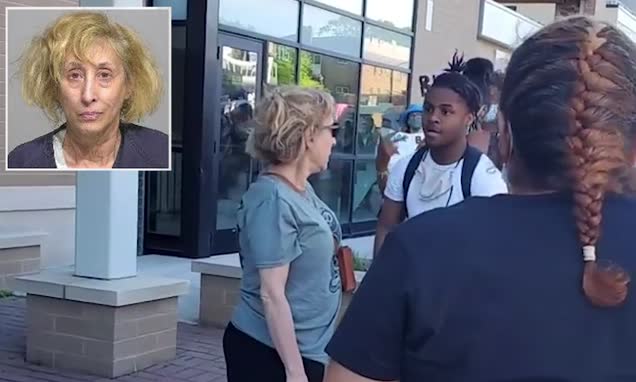 Stephanie Rapkin (inset), 64, a probate lawyer from the suburban Milwaukee town of Shorewood, Wisconsin, was arrested on Saturday for spitting on Eric Patrick Lucas, 17 (pictured). Videos circulating on social media show Rapkin parking her car in the middle of the street blocking a protest by hundreds of locals in Shorewood on Saturday afternoon. According to authorities, a Black Lives Matter march was heading south on North Oakland Avenue when Rapkin left her car in the middle of the intersection of East Jarvis Street and North Oakland Avenue so as to obstruct the procession. Rapkin is then seen walking on the sidewalk and confronting a large group of protesters, most of whom appeared to be in their teens and 20s. One of the young protesters, Eric Patrick Lucas III, is seen yelling in her direction, though it is unclear what he said. Rapkin then spits on the boy. Other protesters intervene and restrain him while crowding around her, urging her to return to her vehicle.