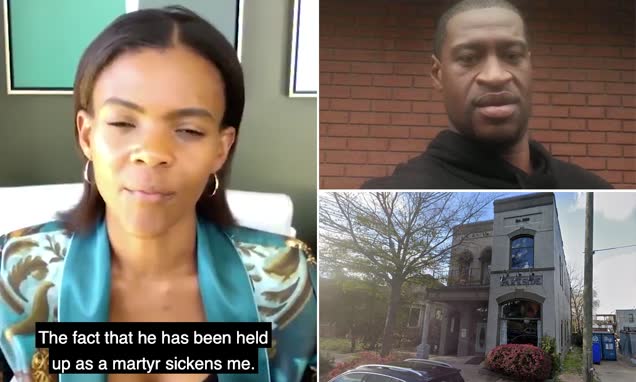 Pro-Trump activist Candace Owens (left) had raised more than $200,000 for Birmingham’s Parkside Café (seen bottom right) over the course of the weekend, whose co-owner Michael Dykes criticized George Floyd (top right) on Friday, calling him a ‘thug’ and labelling protestors demonstrating against his death in Minneapolis police custody last week as ‘idiots’. Dykes’ comments were made in a text message to a co-worker that was later posted online, prompting three employees to quit and sparking outrage online calling for the restaurant to be boycotted. Owens has also come under fire for her own controversial comments about Floyd, describing him as a symbol of a ‘broken culture in black America today’, and said ‘the fact that he has been held up as a martyr sickens me’. Those same comments appear to have prompted GoFundMe to ban her from the platform on Sunday, accusing Owens of spreading ‘falsehoods against the black community.’