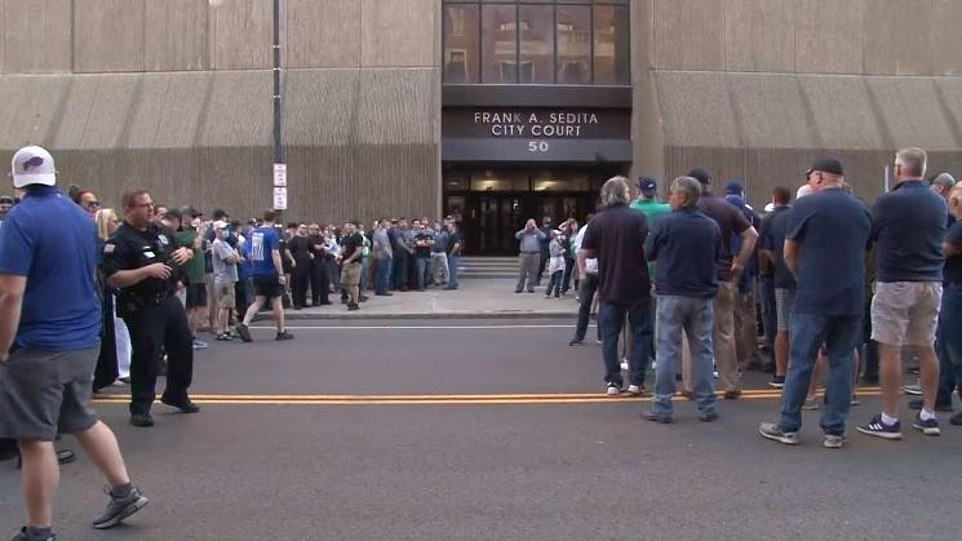 The two Buffalo cops who shoved a 75-year-old peace activist to the ground Thursday causing him to crack his head open on the sidewalk are expected to be charged today as their team of colleagues who resigned in ‘disgust’ over their treatment gather outside the city court (pictured). The two officers, one of whom has been named unofficially as Aaron Torgalski, are to appear in city court Saturday morning to face charges over the shocking incident that left peaceful protester Martin Gugino in a ‘serious condition’ in hospital, according to two sources who spoke to 2 On Your Side. A large group of law enforcement officers had started gathering outside the court before 9a.m. in the latest show of support of their colleagues, after the entire 57-strong Buffalo Police Department’s Emergency Response Team resigned Friday in outrage at the two cops’ suspension without pay. This comes as a Change.Org petition calling for the firing of Torgalski has gained more than 400,000 signatures while separate footage has surfaced of police from the same department violently tackling another protester from behind. Outrage has been building since the footage emerged of elderly peaceful protester Gugino being pushed to the ground by the Buffalo cops, cracking his head on the sidewalk and lying unconscious and bleeding on the ground as officers continue to walk around him.