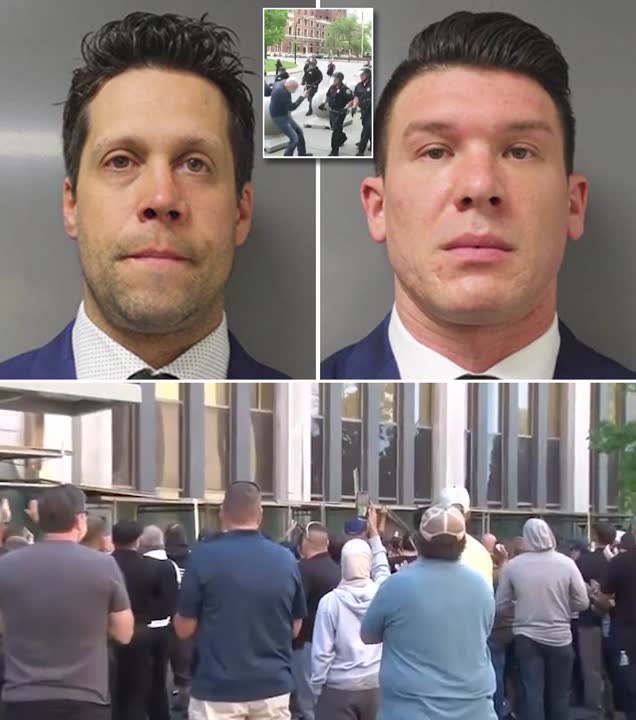 Aaron Torgalski (left) and Robert McCabe (right) were each charged with one count of assault in the second degree over the shocking incident that left peaceful protester Martin Gugino in a ‘serious condition’ in hospital. The cops were arraigned Saturday morning in a virtual court hearing where they both pleaded not guilty to the charges. They each face up to seven years in prison if convicted of the class D felony. They will appear in court on July 20. DA John Flynn said in a press conference announcing the charges that the two cops had ‘crossed the line’ when they pushed the ‘harmless 75-year-old man’. Flynn defended the severity of the charges saying New York law means felony charges must be brought when a victim is 65 years or older and the perpetrator is 10 or more years younger. He also insisted he is not ‘taking sides’ amid rising tensions between cops and protesters as he revealed 39 protesters have also been charged in the city. The announcement of the charges came as hundreds of non-uniformed cops gathered outside the city court in the latest show of support of their colleagues, one day after the entire 57-strong Buffalo Police Department’s Emergency Response Team resigned in outrage at their suspension without pay. Shocking footage showed the two cops pushing 75-year-old Gugino to the ground, causing him to crack his head on the ground. The two cops were suspended without pay immediately and calls mounted for them to be fired.