Troops with riot shields line up outside ‘fortress’ White House to greet hundreds of thousands of protesters in D.C. for the largest George Floyd march yet on the 12th day of demonstrations across the U.S. 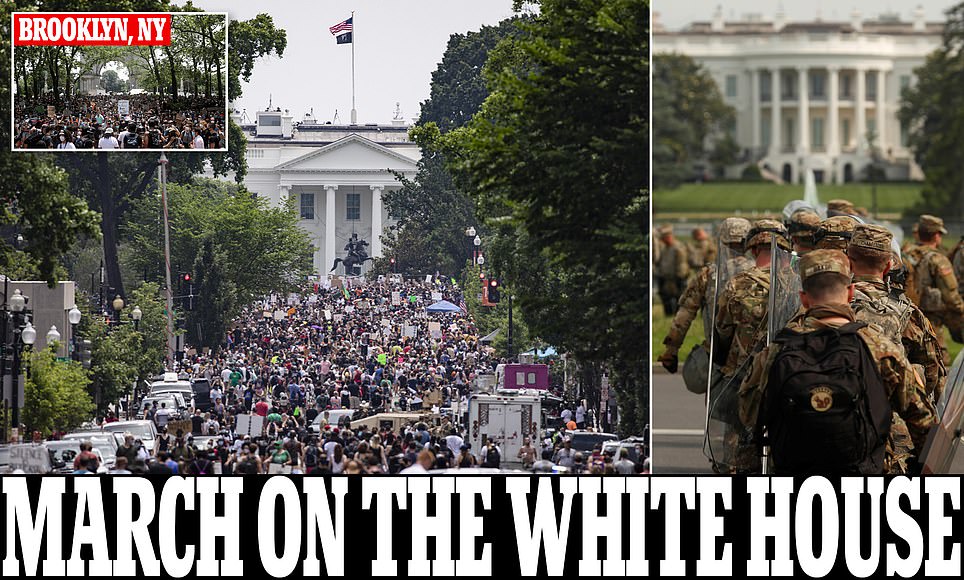 Troops suited up in riot gear surrounded a barricaded White House on Saturday as Washington D.C. prepared for the largest George Floyd protest yet.

Activists have called for thousands of people to descend on the nation’s capital as the United States enters the twelfth straight day of demonstrations against police brutality and systemic racism.

D.C. braced itself with members of the National Guard guarding famous landmarks and patrolling a new pedestrian-only demonstration area where streets were closed off to all traffic.

The White House remained a fortress, with black fences between seven and nine feet high erected around its perimeter cutting off protesters, as D.C.’s mayor formally renamed the street outside ‘Black Lives Matter Plaza’.

The D.C. protests will be joined by many more as hundreds of thousands are expected to turn out across the country.

Meanwhile in Philadelphia, the march was briefly interrupted by a newly wed couple who joined the protest still dressed in a wedding dress and suit.

In North Carolina, mourners and protesters stood side by side as a memorial and public viewing for George Floyd’s body was held.

Hundreds of cars lined up to pay their respects to the man whose death has sparked protests all over the world.

Demonstrations even emerged in the most unlikely of places. Texas-based journalist Christopher Hooks reported that between 150 and 200 people took part in a Black Lives Matter rally in Vidor, an East Texas town that’s infamously associated with the Ku Klux Klan.

As of just after midday, at least 6,000 had already gathered in Washington D.C., split between The Lincoln Memorial and those close to the White House.

D.C. Chief of Police Peter Newsham said the event ‘may be one of the largest that we’ve had in the city’ but would not commit to a number. He added that no arrests were made from protests since Tuesday and he hoped the streak would continue.’

As day broke on Saturday, police closed down much of downtown D.C. to traffic and a pedestrian-only demonstration area was created between the southern boundary of the Mall and L Street NW to the north.

The city’s metro system also announced it was reopening cars closed due to coronavirus to boost rider capacity.

Saturday’s protests are not being run by one group or organizations with dozens announced across the capital and expected to mix and merge with each other throughout the day. No leaders are scheduled to speak and no agenda has been set as various grassroots movements join forces.

The demonstrations are expected to run though the day with some planning to stay until Sunday morning.

They will target city officials and buildings as well as federal government buildings.