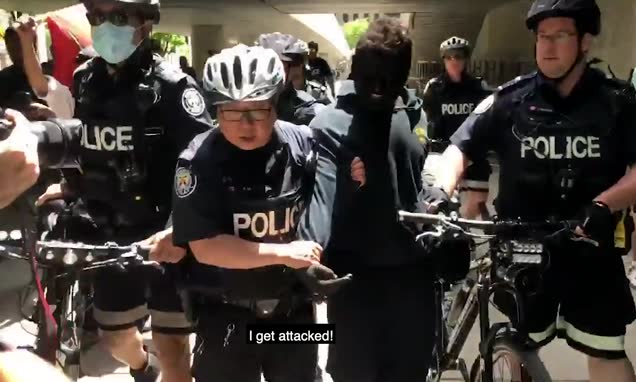 A Toronto man has been arrested and charged after he turned up to an anti-racism protest in blackface on Saturday.

The man, who has not been identified, showed up wearing black paint on his face at the event in Nathan Phillips Square, where protesters had gathered to call for an end to racism and police brutality.

Toronto police said the man was arrested and charged with breaching the peace.

Shocking footage circulated on social media shows the white man covered in black paint on his face and hands walking into the crowds of protesters.

His actions sparked outrage among peaceful protesters with some throwing water in his face and one man shouting that he was ‘disrespectful’.

Toronto cops were then seen escorting the man away.

Police later confirmed the man had been arrested and charged over the highly offensive incident.

The shocking events took place as several events were held in Toronto Saturday calling for an end to racism against African-Americans.

Calls for change have been building in Canada following the death of 29-year-old black woman Regis Korchinski-Paquet in May.