Ethan Magness to White Pastors: Our Decision to Show Up Matters 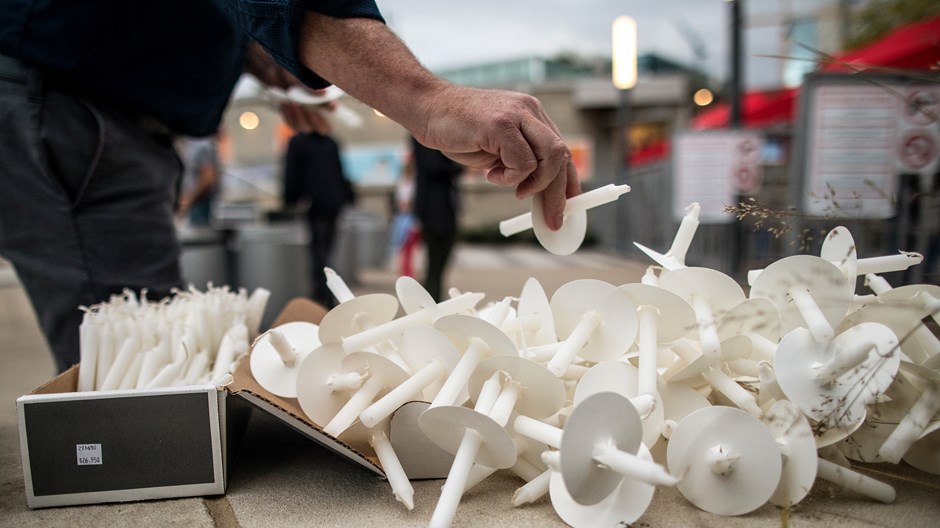 This is not the first time that Bishop Michael Cummings of Greater Love International Church has asked me to say something at an event like this. And every time, I sort of wish he wouldn’t.

The sun is just starting to go down in Founders Park in downtown Johnson City, Tennessee, and people are gathered for a prayer vigil in response to the police killing of George Floyd and the racism that continues in this country. Here’s one thing I know: I am a white minister. In most of my life, I succeed by talking. In this conversation, I succeed by listening. When I talk about race and racism, there are so many ways to say something wrong. Others know more than I do. I sit here and I am afraid I will say something that will hurt or offend people. I don’t want to make a mistake and I know that I might.

But I have a rule that when Michael asks me to show up, I will show up. He asked tonight, so I am here, even though I’m nervous.

When I took the position of senior minister at First Christian Church in Johnson City in 2016, I knew I wanted to connect with a black church in town and develop a relationship with an African American minister. I asked around about a pastor who might work with me and several people pointed me to Michael. We both went to Emmanuel Christian Seminary, so while we didn’t know each other, we had friends in common.

I remember in our first conversation, I said, “I want to work against racism but I don’t know how. If I can be your ally, please let me.” We began to meet and eat and talk. As I said, I’m good at talking. But with Michael, I learned I also needed to listen. Sometimes I needed to just show up and stand in the crowd. Out of our relationship, our churches began to meet and partner together in worship and service and prayer and action.

I learned so much from Michael. I learned, for example, that my experience in the world is not universal. When I think it is, I say things about race and racism that aren’t right. If I want to be an ally against racism in my city, I have to listen to others’ experiences and trust them. I have learned to trust Michael’s experiences. I’ve also learned, if I want to make a difference against racism, I have to show up when Michael asks me, even when I am nervous and afraid that I will say the wrong thing.

Tonight, before I came here, I re-read what Martin Luther King Jr. said about white moderates. I read it because I think King is speaking directly to people like me. “I have almost reached the regrettable conclusion,” King wrote, while sitting in an Alabama jail, “that the Negro’s great stumbling block in his stride toward freedom is not the White Citizen’s Counciler or the Ku Klux Klanner, but the white moderate, who is more devoted to ‘order’ than to justice; who prefers a negative peace which is the absence of tension to a positive peace which is the presence of justice.”

I made a commitment years ago to fight my natural preference for order and seek justice instead, so that those words would never be true of me.

The vigil is peaceful this evening. But then, before it is my turn to speak, the order in the park is disrupted. Our crowd was gathered quietly to pray and but another, larger group showed up angry. They were mostly young people and they had been protesting, shouting and blocking traffic with their bodies. It is a tense moment as they came into the park, but then Michael proves himself to be the right leader. He invites the protestors into our community of prayer. He makes a place for their voices to be heard, and consequently creates a space when they can hear the voices of those who had gathered to pray.

When it was my turn to say something, I hope again he wouldn’t ask me. But he comes over and says I should say something about hope. I can speak to large crowds and preach to multiple services. But in this moment, I am a little tongue-tied. But I don’t tell him no.

I tell the crowd that I do have hope. I believe that the hope I seek for the end of the oppression of my African American brothers and sisters lies in the church actively resisting the evil of our day. 1 Peter 3:10–12 says:

Whoever would love life and see good days must keep their tongue from evil and their lips from deceitful speech. They must turn from evil and do good; they must seek peace and pursue it. For the eyes of the Lord are on the righteous and his ears are attentive to their prayer, but the face of the Lord is against those who do evil.

Notice the rhythm of Peter’s challenge. Turn from evil, he says, and do good. I think that means that white people in America should not be satisfied in our hearts if we tell ourselves, “I am not racist; I have turned from that evil.” For starters, it probably isn’t true. Many of us have so internalized so much racial bias that we don’t notice the evil in our own hearts.

But even if, praise God, it’s true that we’ve freed ourselves from the culture we grew up in and we’ve grown out of all the bad biases and assumptions, that is not where Peter stops. He says, “Turn from evil and do good.” We must turn from racism, yes, and then we must do good.