Trump is ‘healthy’ according to annual medical released weeks after it was finished – which says he is obese, taking hair-loss pills and had his heart monitored while on hydroxy 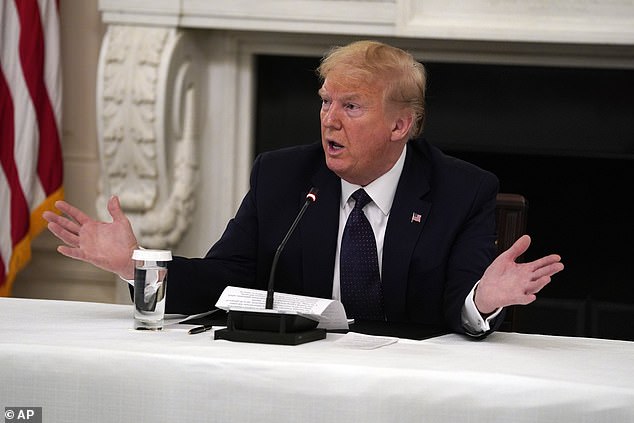 President Donald Trump has gained a pound in the past year but ‘remains healthy,’ the White House physician announced on Wednesday, and suffered no side effects from his course of hydroxychloroquine.

The White House released results from the second part of Trump’s annual physical, which he had at the White House in April, according to a memo from Dr. Sean Conley, the president’s physician.

The White House did not immediately respond to questions about when in April and why the delay in releasing the information on the president’s health.

The two-page memo confirms the president took a two-week course of hydroxychloroquine in May as a preventative measure against the coronavirus, which Trump had told reporters he was taking.

His heart was monitored via an EKG for changes in the QT level, which is a way of monitoring the electrical patterns of the heart.

Hydroxy has multiple side effects, including nausea, vomiting, loss of appetite, diarrhea, dizziness, or headaches.

Trump completed the hydroxychloroquine regime ‘safely and without side effects,’ the doctor wrote.

He is regularly tested for the virus and has been negative each time, according to Conley’s summary.

The president has touted the anti-malaria drug as an effective treatment against the coronavirus and has been its advocate. But a study out Wednesday found that it did not prevent the disease in 821 people who had been exposed to patients infected with the virus, researchers from the University of Minnesota and Canada said.

The FDA has issued warnings about hydroxychloroquine, saying it should only be given to patients in the hospital who tested positive for the virus.

The 6’3′ Trump weighed 244 at his physical, which is one pound up from last year and has him ‘obese’ by the federal government’s standards. Those numbers give him a BMI of 30.5, which is technically obese.

Last year the president had gained four pounds from when he first took office. Trump has been instructed in the past to loss 10-15 pounds, advice he has not taken.

The president’s favorite meals are steak or a hamburger and he enjoys an iceberg lettuce salad with blue cheese. His only know exercise is golf.