Ed Stetzer and Andrew MacDonald on the Bible is Not a Prop: in Fact, We Need It Right Now 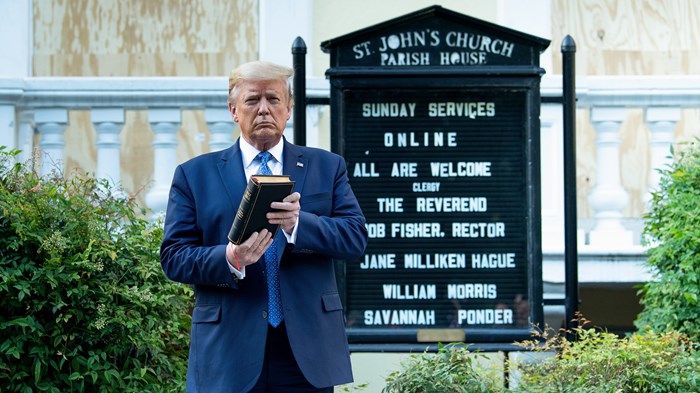 It was a jarring and awkward photo op. It did not play well, even with many of the president’s supporters

Every pastor has, at some point, accidentally held a Bible upside down as the president did, so that can happen. But, the president did not open it. He did not read from it. When asked if it was his Bible, he said it was a Bible (emphasizing the “a”).

To use the Bible in a photo op, after clearing peaceful protestors from Lafayette Park with, The Hill reported, “tear gas and smoke bombs hissing” so he could walk to a church, was simultaneously unhelpful to the current situation and at odds with the message of that Bible.

Republican Senator Ben Sasse described it as “photo op that treats the Word of God as a political prop.”

A Bible in a photo op was not the Bible we needed.

Anyone who has been paying attention to national politics immediately understood what was happening. Likely aimed towards evangelicals like me, it would show that, somehow, standing in front of a church and awkwardly holding a Bible means that we should support the president.

In the past I have voiced my support when I have seen this president’s administration do good things. I have worked with the administration toward their good efforts on opioid abuse and mental health.

But what Trump did on the steps of St. John’s is what most pastors around the country remind their congregations not to do. The Bible will be as useful to you displayed on the fire mantle as it will when held aloft outside a church. Jesus himself warns against this in Matthew 6, cautioning to “beware of practicing your righteousness before other people in order to be seen by them.”

In other words, God is not pleased when we use the Bible as an ornament to be seen by others.

Rather, the power of the Bible is in the story that it tells. More than just 66 books and over 1000 individual narratives, the Bible is one cohesive story about how God has reconciled us to Himself through the birth, life, death, and resurrection of Jesus.

It is not a talisman that bestows godliness by proximity or demands our political fealty to the bearer. To use it as such represents a profound miscalculation about its Author.

The message of the Bible is that Jesus died on the cross to provide forgiveness of our sin. And, most critically to where we are now, we stress the importance of people taking hold of the Bible and reading it themselves, because it is through the words inside that we encounter Jesus and become more like Him.

This episode laid bare a fundamental misunderstanding we must recognize and confront: The Bible is not a tool for political photo ops.

Yet, the applicability of its teaching might surprise many at this moment.