Defense secretary Mark Esper reverses order to remove combat soldiers from Washington D.C. after talks at the White House as he fights to save his job in wake of publicly telling Donald Trump NOT to deploy federal forces 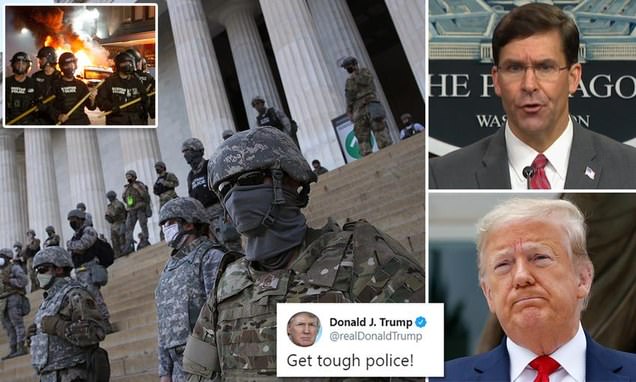 Secretary of Defense Mark Esper was fighting for his job Wednesday even as authorities seek to gain control of the nation’s streets – as he contradicted President Donald Trump on use of a special military authority and the Army announced a sudden reversal on a plan to start withdrawing active duty troops from around Washington.

The day featured sudden turnarounds and contradicting explanations about a photo-op that both Esper and the president joined in on Monday, with no clear plan about how regular military, National Guard forces, local police, and outside forces are coalescing to attempt to maintain order.

About 200 members of the Army’s 82nd Airborne division were to have departed the D.C. region on Wednesday – only to have the order suddenly reversed after Esper paid a visit to the White House following a morning press conference where he tried to distance himself from the infamous photo-op at St. John’s church Monday.

The the change came after Esper’s White House meeting and internal discussions at the Pentagon, Army Secretary Ryan McCarthy told the Associated Press in an on-record statement.

It came came hours after a 10 am order to draw down some of the 1,600 forces – including infantry members – who had been positioned outside Washington, D.C., and after the White House declined to say Trump had confidence in Esper, who succeeded ‘acting’ secretaries and who himself filled such a role after the departure of Gen. James Mattis.

Esper told reporters Wednesday he was opposed to invoking the 1807 Insurrection Act to send the U.S. military to impose control of cities – even as the president talked tough on Twitter and ordered an infantry battalion to Washington, D.C.

It was a statement that caught the White House off guard at a time President Trump is brandishing his maximum authority – and could put Esper’s job in jeopardy.

Esper made the public statement of opposition to the idea after the White House publicly floated it on Monday – and after the administration took heat for the use of tear gas and rubber bullets to clear protesters out of Lafayette Park just before Esper joined President Donald Trump at a photo-op.

The decision to maintain the force that had been flown into the region comes even as protests overnight Tuesday were calmer then they were the night of the Lafayette Park incident.

It came as it was revealed that Maryland and Virginia governors had refused to send their national groups to the nation’s capital, which has a longstanding struggle over home-rule with federal authorities.

Esper also sought to back away from the photo-op itself, saying that while he knew he would be going to the church, he thought he would be visiting troops. He ended up posing with Trump and officials including Attorney General Bill Barr, who the White House said ordered the action Monday morning, only to discover it hadn’t occurred hours later.

‘What I was not aware of was exactly where we were going when we arrived at the church and what the plans were once we got there,’ Esper said. He also tried to walk-back a comment that referred to U.S. cities as ‘battle-space.’ ‘In retrospect I would use different wording’ he said of his conference call with Trump and governors,’ he said.

Just hours after he spoke at the Pentagon, Defense officials said some of the active duty military troops flown into the Washington region to deal with civil unrest were being sent home.

About 200 members of the 82nd Airborne were to depart the region Wednesday, officials told the Associated Press. They are among a group of 1,600 infantry and military police being held at basis in Maryland and Virginia outside Washington, after President Trump repeatedly urged use of military force to regain control of city streets across the country.

Esper made his public comments while facing ratcheting political pressure. ‘I say this not only as secretary of defense, but also as a former soldier and a former member of the National Guard,’ Esper told reporters at a Pentagon press conference as he announced his position.

‘The option to use active duty forces in a law enforcement role should only be used as a matter of last resort and only in the most urgent and dire of situations,’ he said.

‘We are not in one of those situations now. I do not support invoking the Insurrection Act,’ he added.

Esper’s public rebellion raised immediate questions inside the White House over how long he can survive.

‘As of right now secretary Esper is still Secretary Esper, and should the president lose faith we will all learn about that in the future,’ white House Press Secretary Kayleigh McEnany said when asked if Trump still has confidence in him.

McEnany was asked if Esper had made his views on the Insurrection Act known to the president before his public statement, as well as whether Trump had confidence in him.