Trump gets religion: After THAT walk to church past tear-gassed demonstrators president and Melania visit shrine to Pope John Paul II as he boasts about ‘overwhelming force’ that kept peace in DC 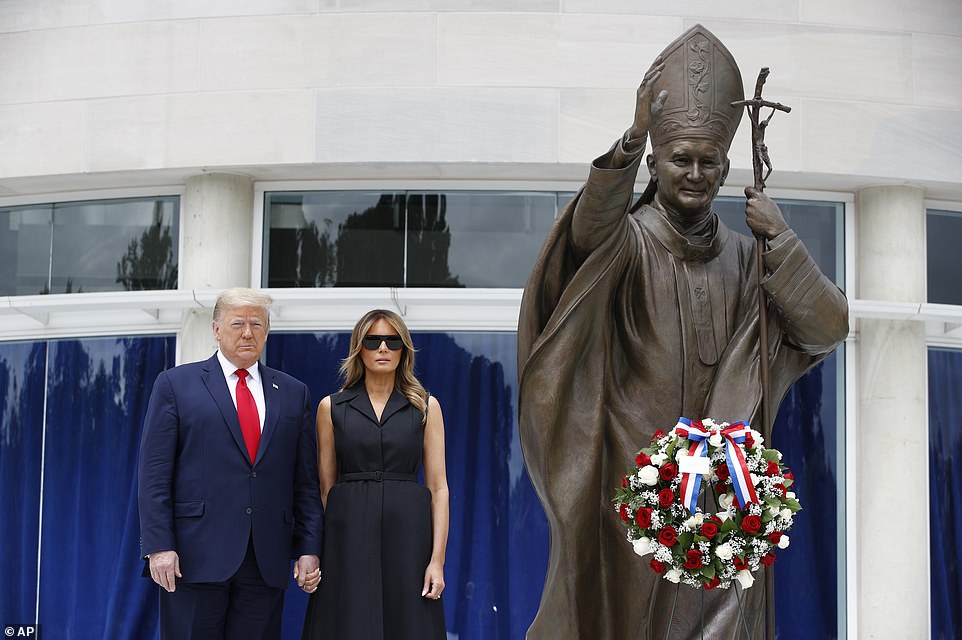 As Washington, D.C. cleaned up Tuesday morning, Trump took first lady Melania on a trip to the national shrine to Pope John Paul II – a second religious visit in two days that caused church leaders to chastise the president.

‘I find it baffling and reprehensible that any Catholic facility would allow itself to be so egregiously misused and manipulated in a fashion that violates our religious principles, which call us to defend the rights of all people even those with whom we might disagree,’ Archbishop Wilton Gregory said in a statement just before Trump’s visit to the national shrine

Gregory is the nation’s highest-ranking African-American bishop and has led the Archdiocese of Washington for just over a year.

In the statement, the Archbishop pointed to the late Pope John Paul Il’s defense of human rights in condemning ‘the use of tear gas and other deterrents to silence, scatter or intimidate them for a photo opportunity in front of a place of worship and peace.’

Although he did not use the president’s name once in the statement, it was titled ‘Archbishop Wilton Gregory Issues Statement on Planned Presidential Visit,’ and claimed that Trump’s actions Monday and Tuesday were all for the photo-op.

Donald Trump’s campaign aide and attorney blasted the Archbishop’s comments, claiming he is a ‘pawn of the leftist media.’

The growing controversy over Trump’s photo-op came as:

‘Distracting from the powerful image and statement of our United States President holding up a Bible in front of an historic American Church,’ Jenna Ellis tweeted in response to a post about Gregory’s comments.

‘This bishop is unfortunately a pawn of the leftist media that thrives on destruction of all that is moral and just,’ she continued.

About five hours after making the visit to the shrine, Melania released four photos from the short trip to her official @FLOTUS Twitter page and shared a message where she reasserted her husband’s ‘passion for religious freedom.’

‘@POTUS & I honored the life & legacy of Saint John Paul II at @JP2Shrine today,’ the first lady posted. ‘His passion & dedication for religious freedom is a legacy that we must protect for people around the world.’

One of the images is of the first couple from behind kneeling in front of the altar in the shrine’s chapel.

Trump’s visit to the shrine came the morning after he made a very public trek from the White House to St. John’s Episcopal Church, which caught on fire during riots on Sunday.