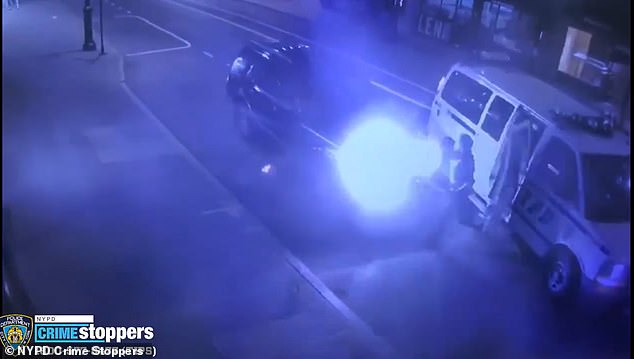 An NYPD officer was left injured on Monday morning after he was run over by an SUV driven by looters who had just ransacked a Manhattan cell phone repair store, authorities have said.

Surveillance video shows a group of seven assailants running along Sixth Avenue and 8th Street in Greenwich Village at 3:30am, carrying various items in their arms having just broken into the I Fix Screens cell phone store nearby.

Some of the assailants then jump into a red Ford Explorer that had been waiting for them in the street. An NYPD van monitoring the situation from behind then speeds towards the SUV, before pulling alongside it to try and box it in.

An NYPD officer is seen getting out from the passenger side of the marked vehicle when the SUV drives away, running over the officer in its path and hauling him onto the hood of the car.

The assailants then fled the scene. Meanwhile, paramedics were called and the officer was taken to Bellevue Hospital Center in stable condition with injuries to his legs, authorities said.

The brazen crime came during a night of looting and protests in the city over the killing of George Floyd by Minneapolis police last week.

Surveillance footage also shows the group of young men kicking in the front door of the I Fix Screens store, ransacking the stockroom and shelves before fleeing.

No arrests have been made and the incident remains under investigation.