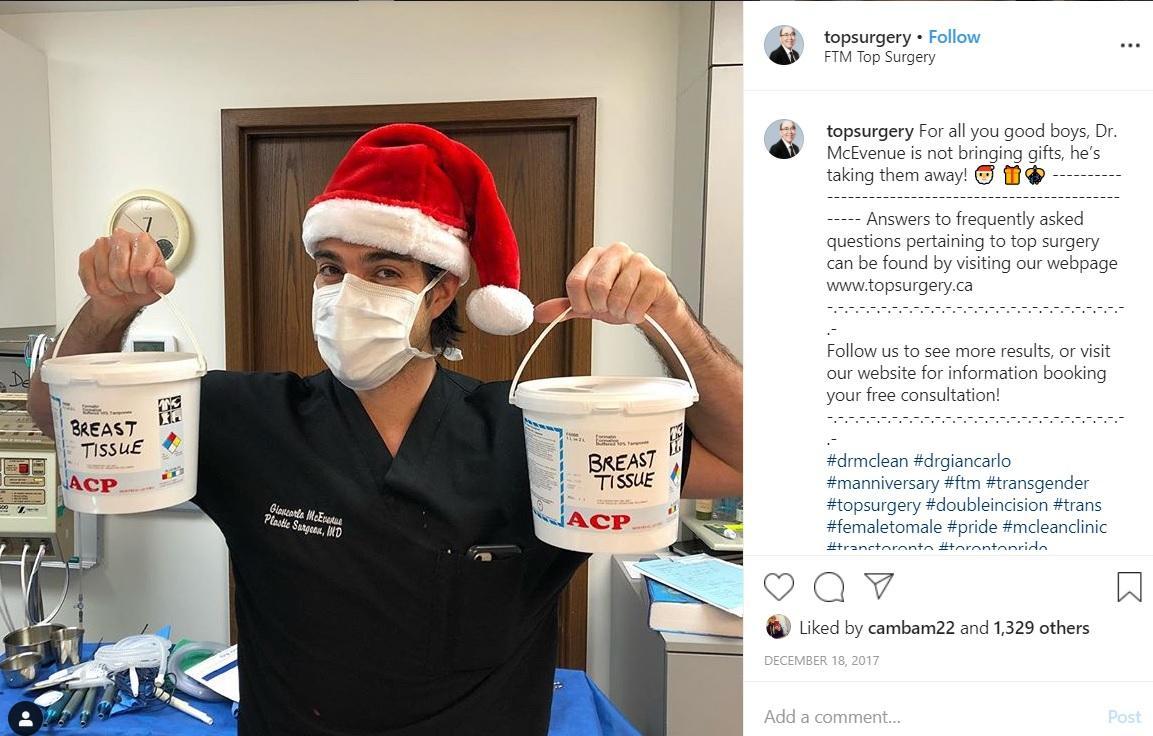 A Canadian gender clinic was found to be in violation of advertising standards following a complaint about its promotion of radical surgeries to young people using gruesome photos and post-operative patient testimonials.

In response to a complaint against the McLean Clinic — a medical outfit in Mississauga, Ontario, known for performing mastectomies on transgender-identifying females — the College of Physicians and Surgeons of Ontario identified photos and content in the clinic’s promotional efforts deemed to be misleading and undignified and had to be removed, according to Canadian Gender Report, a watchdog site that monitors the activities of transgender medicalization and activism.

One such photo that was found to be in violation of CPSO standards was a picture on the clinic’s Instagram account where Dr. Giancarlo McEvenue is seen wearing a Santa hat and holding up two buckets labeled “breast tissue” that had been surgically removed from female patients.

Cosmetic mastectomies of this type are euphemistically referred to as “top surgery.”

The CPSO’s decision states that the clinic is in non-compliance with the relevant Canadian law, specifically the Advertising Regulation of the Medicine Act. That regulation states that “information communicated must not be false, misleading or deceptive; must not contain a testimonial; and must be readily comprehensible, dignified and in good taste.”

In response to the CPSO’s findings, the McLean clinic has made its account private — a feature that requires followers to be approved first — but advocates actively monitoring the situation say that such a move does not constitute adequate compliance.

“We find the CPSO ruling very reasonable and will be following up to ensure full compliance. Under our socialized medical system, patient testimonials cannot be used to promote a physician’s services, so while the McLean clinic has made their Instagram account private, this does not meet the requirements of the ruling,” said Pamela Buffone, founder of the Canadian Gender Report who filed the complaint against the clinic on behalf of a coalition of like-minded advocacy groups, in an email to The Christian Post Monday.