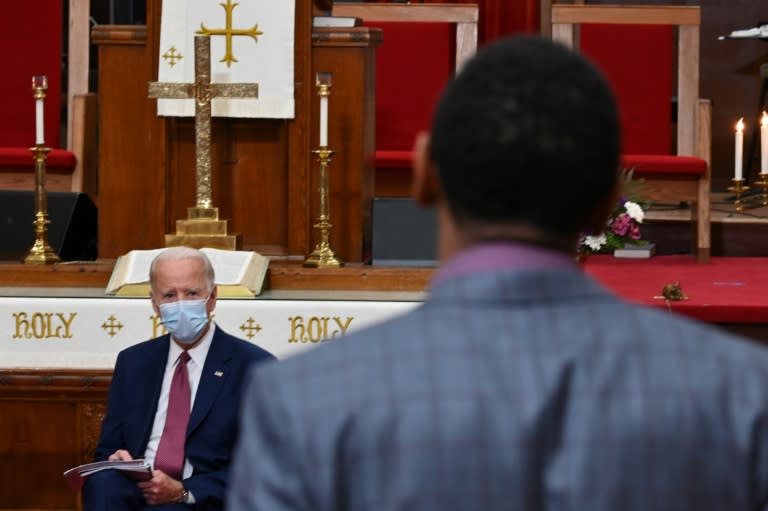 In a meeting with African-American religious and political leaders in which the death of George Floyd at the hands of a Minnesota police officer figured prominently, and speaking later in a virtual town hall, Biden accused Republican Trump of fomenting racist hate and letting minorities suffer most in the novel coronavirus pandemic.

“The band-aid has been ripped off this pandemic and this president,” Biden said, speaking at the Bethel AME Church in his hometown of Wilmington, Delaware.

“Nobody can pretend any longer what this is all about.”

The church meeting was the first time the 77-year-old Biden, who served as president Barack Obama’s vice president, had participated in person in a public gathering since mid-March, when the COVID-19 pandemic abruptly paralyzed his campaign.

“Hate just hides. Doesn’t go away. And when you have somebody in power who breathes oxygen into the hate under the rocks, it comes out from under the rocks,” Biden said of Trump.

“It matters what the president says,” Biden added. “It encourages people to bring out the vitriol.”

Later, speaking at a virtual town hall, Biden returned to the theme of racism.

“There is systemic racism, white supremacy, it’s real,” he said. “You see it. I think we all see it but African-Americans see more clearly.”

The death of Floyd — a black man killed in Minneapolis, Minnesota while in police custody — “invoked the full weight of our history … how black lives have been devalued by society. And it’s not only intolerable but people are angry.”