President Trump is demanding ‘arrests and long-term jail sentences’ for the individuals who were filmed beating a man who was said to have been trying to stop looters from attacking a bar in downtown Dallas on Saturday night.

The president on Sunday tweeted in response to video of the incident, writing: ‘SO TERRIBLE! Where are the arrests and LONG TERM jail sentences?’

Rioters last night were seen on video hurling rocks at a business owner who was allegedly trying to defend his store with a sword before he was brutally beaten unconscious in Dallas.

The victim was stable, police said, after the man was seen slumped over in the street with blood pouring from gashes on his head in the Victory Park area of the city.

Footage shows the alleged store owner wielding a long blade and rushing toward a few rioters. Within seconds, a furious mob descends on the man, hurling rocks at him, kicking him in the head and beating his face with skateboards and fists.

Dallas Police said the man had taken up arms against the individuals to ‘allegedly protect his neighborhood from protesters.’

In a video taken by Elijah Schaffer of Blaze TV, the victim is very rapidly knocked unconscious in the ferocious beating. A few of the witnesses – including the cameraman – rush over to help the man.

One is heard yelling: ‘Turn him over,’ while another cautions, ‘Don’t touch him.’

The victim’s body was mangled by the stomping and kicking of the mob, but he was able to sit up later and was seen holding his hand to his head before being taken in an ambulance.

Across the city there had been 74 arrests by 10.45pm Saturday on the fifth night of rioting across the US over the killing of George Floyd, a black man who died in police custody after a white officer knelt on his neck in Minneapolis.

The National Guard was activated to defend the White House from attack as the Secret Service agents on the ground struggled to keep control of crowds descending on the seat of the US government. 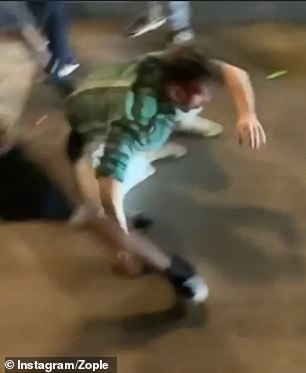 The Big Apple was ablaze as NYPD vehicles were torched and ransacked while shocking footage emerged of cops violently detaining protesters.

In Atlanta a cop suffered ‘significant injuries’ when they were hit by an ATV, while in Chicago, a man commandeered a police horse and rode off on it.

Los Angeles deployed the National Guard for the first since the 1992 riots when the police officers who beat up black man Rodney King walked free of all charges, and California Governor Gavin Newsom declared a state of emergency in LA County.

A total of 11 states and the District of Columbia had activated the National Guard by the early hours of Sunday, as law enforcement buckled under the strain of the protests.

Donald Trump has put the Army on notice to deploy to the streets within a four-hour window – the first time this will have been done in almost 20 years during the 1992 LA riots over the beating of black man Rodney King by cops.

Minnesota – where Floyd died – has borne the brunt of the protests which began there Tuesday before fanning out across the country.

Rioting was still going on in the early hours of Sunday, with the Minneapolis police department reporting a big group of protesters on foot and in vehicles throwing missiles of some sort at cops.

Minnesota Dept of Corrections Commissioner Paul Schnell announced early Sunday there had been ‘dozens’ of arrests through the night but no ‘substantive’ injuries.

The Minnesota National Guard announced at around 10.30pm it was sending 10,800 troops in to tackle protests Saturday night, as pleas for people to observe curfews fell on deaf ears.

The Minnesota National Guard said on Twitter it already had more than 4,100 citizen-soldiers and airmen already in the twin cities of Minneapolis and St. Paul and was ramping it up to a staggering 10,800.

There were just 700 on duty on Friday.

The city was filled with smoke Saturday as protesters let off fireworks and set fires.

Hundreds of protesters had gathered outside the fifth precinct and were driven out by state cops using tear gas and firing rubber bullets.

Footage showed protesters had retreated while the officers increased their circle around the vicinity – defending the police station for fear it will be stormed and torched like the third precinct was Thursday.

People marching from Minneapolis to St. Paul were also met with tear gas from officers stopping them in their tracks and sending masses fleeing from the potent chemical.

This comes as Governor Tim Walz has warned that a renewed spike in coronavirus cases could hit residents as protests have seen thousands take to the streets, while he admitted that the state’s jails cannot contain the number of people being taken into custody.