Race is hard to talk about and often conversations can become divisive, but film is one of our most important meaning-makers, and American movies have been grappling with race for over a hundred years. Here are five essential films that can help us talk about race by seeing how far we have come as a nation and, perhaps, how far we still have to go.

D. W. Griffith was the greatest filmmaker of his day, and this film about the Civil War, reconstruction, and the construction of an Aryan nation in opposition to people of color is, as James Baldwin said, simultaneously one of America’s greatest films and an incitement to genocide. The film was the first to be shown at the White House, and Woodrow Wilson is supposed to have said (he probably didn’t) that it was like history written with lightning. But the movie had incredible real-world results: it revived the Ku Klux Klan and galvanized the NAACP, and it also probably led to multiple real-life lynchings like the 1916 torture and murder of Jesse Washington in Waco, Texas, where the film had been shown multiple times to great acclaim. The black characters in this film are consistently treated as subhuman or unworthy of citizenship. This makes Birth of a Nation a perfect film to address the historical phenomenon Henry Louis Gates calls “Redemption,” the violent pushback from former Confederate states against Reconstruction and the legal gains made by former slaves. 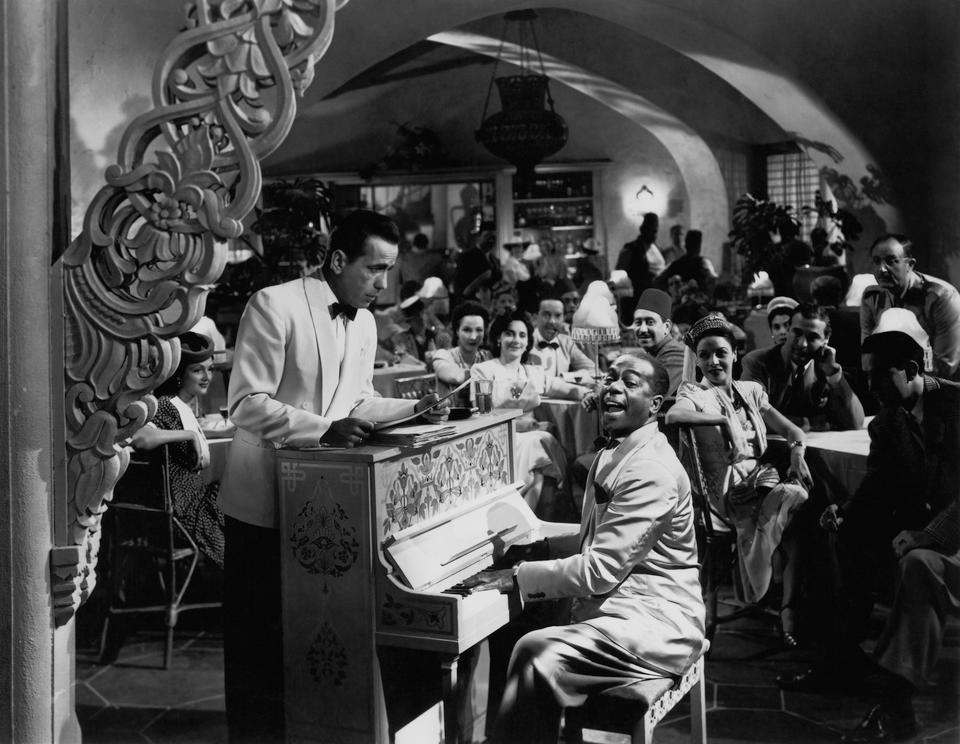 While one could also make a case for Gone with the Wind (1939) as one of the seminal Hollywood films on race and racism, Casablanca represents an important movement forward in Hollywood’s treatment of race. Instead of demeaning or ignoring people of color as Hollywood had done for its first three decades, Sam (Dooley Wilson) is presented as fully human, and Humphrey Bogart’s Rick matter-of-factly dismisses an offer to purchase him: “I don’t buy or sell human beings.” African-American newspapers extolled the role, with good reason. Sam drives the first half of the movie, he stands up to his employer to protect him, and in what must have felt like a startlingly progressive scene for the times, he lifts his glass in toasts with Rick and Ilsa (Ingrid Bergman) in flashbacks. Yes, his is a supporting role, but Sam’s humanity is never questioned, and although he largely gives up his formational role in the second half of the film, this is a landmark depiction of a person of color.

During the production of this film, one third of American states had statutes forbidding mixed-race marriages, and LBJ’s Secretary of State, Dean Rusk, actually offered to resign when his daughter Peggy married a black man. This is a third stage in Hollywood’s treatment of race, and star Sidney Poitier (Dr. John Prentice) is central to it. He played leading roles in films including The Defiant Ones (1958), Lilies of the Field (1963), and In the Heat of the Night (1967), was the first African-American to win the Academy Awards’ Best Actor, and was the one African-American leading man mass audiences clamored to see. In this film, he is matched with classic Hollywood stars Katherine Hepburn and Spencer Tracy (as the parents of his white fiancé), and their interplay is fascinating. The film was written and directed by progressive white men, and Tracy plays Matt Drayton, a liberal San Francisco newspaper publisher who finds himself wrestling with his daughter’s decision. As George Clooney noted, having this good white man wrestle with his hard questions brings it to the cultural forefront. LBJ showed this film at the Western White House in Johnson City, Texas, offering a nice bookend to Wilson’s screening of Birth of a Nation.

African-American filmmakers had been telling stories about people of color since 1919, but with the films of Charles Burnett, John Singleton, and Spike Lee, they achieved national critical acclaim. Do the Right Thing wrestles with racial issues that remain germane to us: representation, gentrification, economic inequities, and violence against black bodies. It also suggests some ways forward. An elderly black woman complained at one of my first public screenings of the film that everyone in the movie was yelling at each other and no one was listening to anyone else, which was one of my earliest insights into how Do the Right Thing moves us. The movie contains an act of heart-breaking violence, but it also ends with the possibility of reconciliation, as Lee’s Mookie talks with his employer (Danny Aiello) on the morning after the community has burned down Aiello’s business. What happened the night before was awful, and their conversation is difficult, but it’s clear that they have regard — maybe even love — for each other. I’ve been teaching this movie for thirty years, and I continue to be stunned by it every single time I show it.

At first in Hollywood, African-Americans were reviled or ignored; then they appeared in small roles, then as leads; then people of color began to tell their own stories and make their own films. But with films like Get Out, Moonlight (2016), and BlacKkKlansman (2018), people of color began to use the tropes and genres of Hollywood film as a means to push back against repression and prejudice. Jordan Peele is retelling the story of Guess Who’s Coming to Dinner, but he recasts it not as a drawing-room comedy, but as a social horror film in the mode of Night of the Living Dead (1968), Invasion of the Body Snatchers (1956/1978), or Rosemary’s Baby (1968). Usually black actors are the First to Die, and black best friends are treated as ineffectual comic relief. But in Get Out, we are invited to identify with Chris (Daniel Kaluuya), to feel every racial snub and micro-aggression directed against him, and to cheer when, instead of the white virgin, he (with the tenacious investigation of his best friend Rod [Lil Rel]) is the one who survives the horror that could have destroyed him. One of my white students said she learned more about racism from this film than anything else she had ever encountered; great movies can be that vehicle of change, remorse, and reconciliation for us.