George Floyd riots spiral out of control: Chaos erupts in 25 major cities from New York to LA as protesters torch cop cars, burn down buildings and hurl fireworks at riot police on fifth night of violence 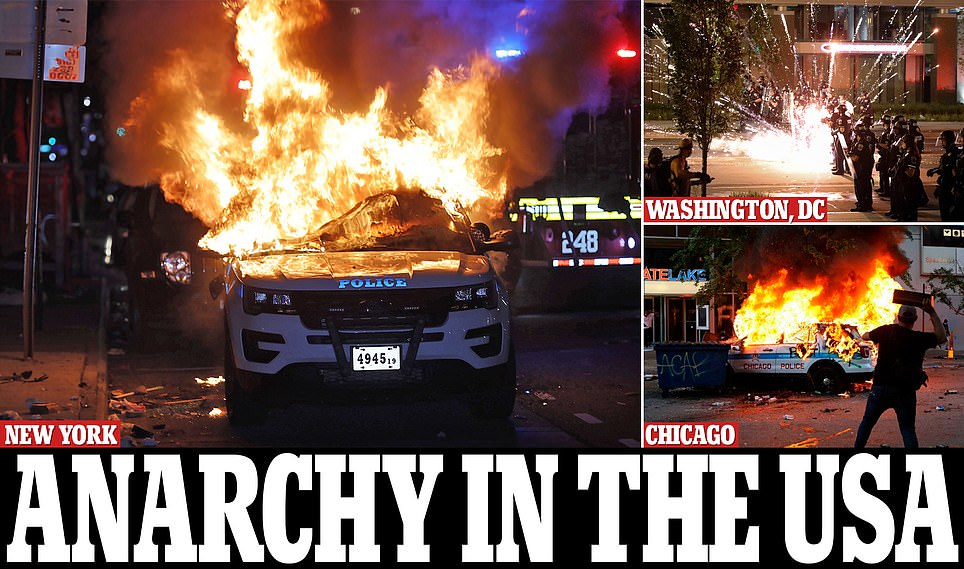 George Floyd riots spiralled out of control Saturday night as cop cars were torched, stores were looted and 25 cities enacted curfews from coast to coast on a fifth night of protests that show no signs of stopping.

Scenes of destruction continued to spread across America as the death of the black man at the hands of white cop Derek Chauvin ignited outrage over what many feel is a systemic problem with police brutality against African-American men.

In Minneapolis, protesters were seen fleeing after cops hurled tear gas into the crowds while some responded by launching fireworks back at officers.

The National Guard was activated to defend the White House from attack as the Secret Service agents on the ground struggled to keep control of crowds descending on the seat of the US government.

The Big Apple was ablaze as NYPD vehicles were torched and ransacked while shocking footage emerged of cops violently detaining protesters.

A man was left critically injured in Dallas when he was attacked and stomped on by a group of people when he allegedly tried to defend a store with a large sword.

In Atlanta a cop suffered ‘significant injuries’ when they were hit by an ATV.

At least eight states and the District of Columbia have either activated or requested the National Guard including Minnesota, Georgia, Ohio, Colorado, Wisconsin, Kentucky, Utah and Texas as local law enforcement struggle to bring the carnage under control.

Meanwhile at least 25 cities roll out emergency curfews to try to bring rioting and looting under control.

Minnesota – where Floyd died – has born the brunt of the protests which began there Tuesday before fanning out across the country.

The Minnesota National Guard announced at around 10:30p.m. it was sending 10,800 troops in to tackle protests Saturday night, as pleas for people to observe curfews fell on deaf ears.

The Minnesota National Guard said on Twitter it has more than 4,100 citizen-soldiers and airmen already in the twin cities of Minneapolis and St. Paul – soon to ramp up to a staggering 10,800.

There were just 700 on duty on Friday.