US coronavirus death toll tops 100,000 just four months after first case was confirmed in the country – with more Americans now dead from virus than were killed in every conflict since Korean War 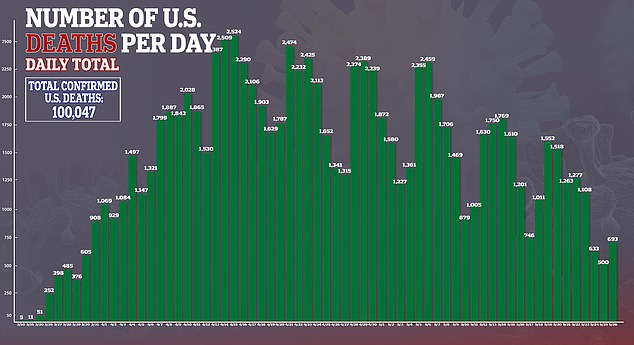 The U.S. death toll from coronavirus topped 100,000 on Wednesday, a startling milestone just four months after the country’s first case was confirmed.

It remains the highest death toll from the virus in the world and surpasses the U.S. military combat fatalities suffered in every conflict since the Korean War.

Johns Hopkins University said there were at least 100,047 American deaths from coronavirus as of Wednesday evening. The figure is more than double the deaths in any other country.

It is a figure that President Trump initially stated would never be hit as he claimed in February that the virus would go away itself as warmer weather began.

He later stepped back on these comments saying that keeping the death toll to 100,000 would be a sign that the administration had ‘done a very good job’.

As the milestone neared, the president was in Florida after attempting to defend his administration’s response to the pandemic.

The death toll reached the devastating milestone after a top coronavirus model relied on by the White House predicted that 131,000 Americans will die from COVID-19 by August.

There are currently over 1.69 million coronavirus across the United States.

Deaths in the U.S. from coronavirus now equal those in the 1968 flu pandemic and the outbreak is on track to become the deadliest public health disaster since the 1918 flu pandemic in which 675,000 Americans died.

Some experts, including Dr. Anthony Fauci, the nation’s top infectious disease expert, have warned that the death toll may still be higher than reported.

They fear that some earlier deaths from coronavirus may have been misidentified and that there are people who died at home untested who have not been included in official figures.

Many states and counties only include tested cases in their numbers.