What’s going on? White woman in Central Park calls the NYPD and hysterically tells them ‘an African-American man is threatening her life’ – when all he asked her to do was leash her dog 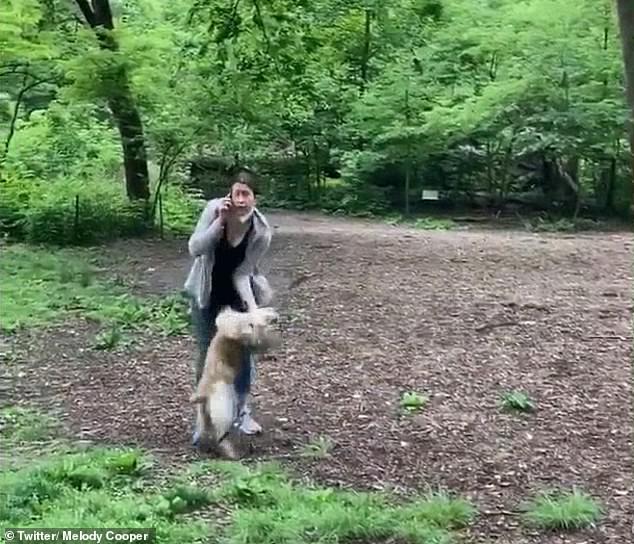 A video of a white woman calling cops and telling them an African American man was threatening her life after he asked her to put her dog on a leash in New York’s Central Park on Monday has ignited anger online.

Video posted Monday by Melody Cooper, a writer and director on HBO’s Two-Sentence Horror Stories, shows the woman out walking her dog which is not attached to a leash.

Christian, who does not appear on camera, claimed in a Facebook post that he alerted her to a sign that states dogs cannot be walked in the Rambles from 9am to 9pm as it’s an area that protects wildlife.

The man, who is an avid bird-watcher, claimed she replied that the dog runs are closed and her pet ‘needs his exercise’.

Christian explained in a Facebook post that he replied: ‘All you have to do is take him to the other side of the drive, outside the Ramble, and you can let him run off leash all you want.’

He states she replied: ‘It’s too dangerous.’

He then beckoned the pooch toward him and pulled out ‘dog treats I carry for just for such intransigence’.

But he stated he didn’t get a chance to toss any treats ‘before Karen scrambled to grab the dog’ and yelled: ‘DON’T YOU TOUCH MY DOG!’

‘That’s when I started video recording with my iPhone, and when her inner Karen fully emerged and took a dark turn…’ he wrote on Facebook Monday.

In the clip he responds: ‘Please don’t come close to me’ several times as the woman asks him to stop filming then tells him she’s calling the cops.

When Christian invites her to ‘please call the cops’, she responds, ‘I’m going to tell them there’s an African American man threatening my life.’

Christian responds to the dog owner: ‘Please tell them whatever you like.’

She is then heard saying: ‘I’m in the Ramble and an African American man with a bicycle helmet, he is recording me and threatening my dog.’