‘Together we will vanquish the virus and America will rise’: Trump commemorates Memorial Day in back-to-back appearances with Melania at Arlington Cemetery and Baltimore’s Fort McHenry 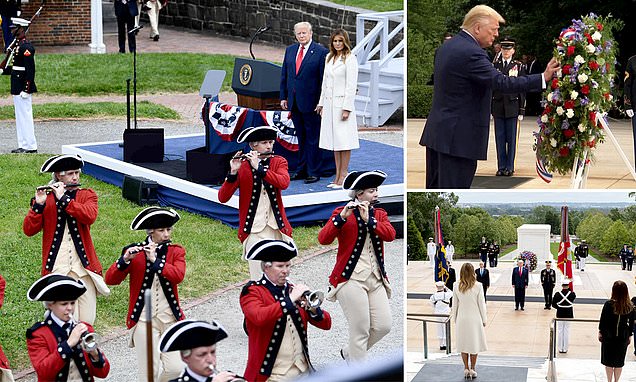 President Donald Trump participated in a ceremony honoring America’s war dead at Arlington National Cemetery on Monday morning before flying to Baltimore, where he promised the nation would ‘vanquish’ the coronavirus.

Trump traveled by motorcade across the Potomac River for the ceremony at the Tomb of the Unknowns at Arlington after wishing the nation a ‘HAPPY MEMORIAL DAY’ on Twitter.

As in the past, military honor guards stood silently, a duty they fulfill year-round.

The president stood with his hands clasped in front of the wreath, which bore red, white, and blue flowers. He reached out and touched it, then gave a salute.

He did not deliver remarks, as is traditional at the annual ceremony, where a series of changes were meant to preserve traditions while also maintaining social distancing amid the coronavirus pandemic.

The ceremony scheduled for 10am did not begin until 30 minutes after the scheduled start time. The president’s motorcade left the White House at 9.58am, according to the pool reporter traveling with him, on a day the president tweeted threats to North Carolina about the GOP convention and defended his decision to play golf on Saturday and Sunday.

Mark Milley, chairman of Joint Chiefs of Staff, Defense Secretary Mark Esper and other top military officials were also present, as were two top officials in the Space Force, present at Memorial Day ceremonies for the first time.

Trump was accompanied by First Lady Melania Trump. She walked solemnly toward the tomb as she arrived, wearing a long white coat.

As in the past, a military bugler played ‘Taps’ while Trump saluted.