There’s a Devil Loose: Mother ‘pushes’ her autistic son, nine, into a canal ‘in her first failed attempt to kill him’ before taking her son to ANOTHER spot where he drowned 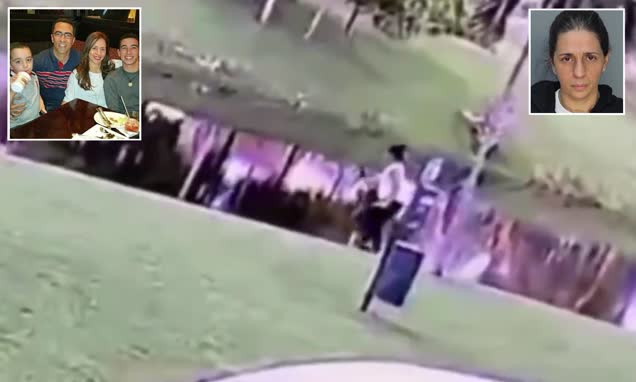 This is the horrifying moment a mother appears to push her autistic son into a canal in what police say was her first attempt to kill him.

Patricia Ripley, 45, faked Alejandro Ripley’s abduction after trying to drown him twice, with witnesses rescuing the boy from a Florida canal the first time, and the second attempt ending in the boy’s death, officials said Saturday.

Alejandro was autistic and nonverbal. He was found floating in a Miami canal Friday. Ripley is facing attempted and premeditated murder charges.

Footage obtained by Univision shows as Ripley walks with Alejandro, stroking his head, before appearing to push him into the water. She then runs off screen before returning with neighbors who saved the boy.

In an interview Saturday, Fernandez Rundle said Ripley apparently tried to drown her son at Kendall Acres Condominium complex, where the footage was taken, but nearby residents heard yelling and rescued him.

Then, Fernandez Rundle said, Ripley drove her son to another canal at the Miccosukee Golf and Country Club.

‘Unfortunately when she took him to the second canal, and there was no one there,’ Fernandez Rundle said. ‘She tried it once, and people rescued him. He was alive. He could have stayed alive. She intended, from all the facts of the case, to kill him.’

The boy’s father, Aldo Ripley, broke down in tears after a bond court hearing Saturday. Between sobs, he said: ‘We love Alejandro, and we got aggrieved with whatever they said about my wife. It’s not real.’

He added: ‘I don’t agree with whatever they’ve said about my wife.’ He told 7News: ‘The only thing I’ll say is that we love our life.’

Alejandro’s brother wrote online: ‘For those who know my family, brother, mother, father, you guys know. Thank you and God bless.’

Fernandez Rundle said an autopsy was being done on the boy Saturday to determine if he had other injuries or perhaps had something toxic in his system. She said no decision has been made yet on whether prosecutors will seek the death penalty.