Oscar winner Denzel Washington proved he is even more impressive off camera after he recently helped a stranger who was in harms way get to safety in Los Angeles.

The 65-year-old had been driving around West Hollywood on Thursday afternoon when he spotted what appeared to be a homeless man in the middle of a busy street, according to TMZ.

Deciding to be a good Samaritan, Denzel pulled his Range Rover to the shoulder of the road and got out to see if he could assist the man.

At around 1 p.m. Washington passed the man, who was dangerously close to oncoming traffic, and stopped to see if he could get him out of danger.

The acting legend was dressed in a protective medical mask, a grey T-shirt, black basketball shorts and a baseball cap.

Denzel appeared to put himself at personal risk as he approached the homeless man in the street to speak with him and diffuse the situation.

Somehow, the actor managed to get the man safely on to the sidewalk while someone else phoned police officers, according to TMZ. 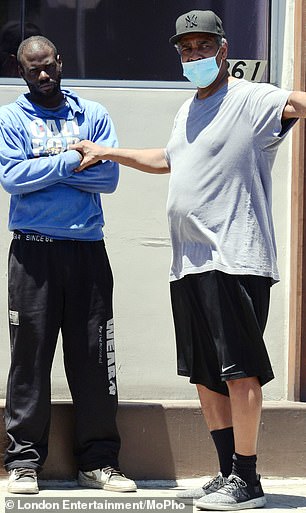 As if that wasn’t enough, the outlet reported that Washington ‘continued to comfort’ the man while he dealt with cops.

The homeless man was briefly detained and placed in handcuffs for an unknown reason but later released – Denzel was by his side through the whole ordeal.

He even appeared to be speaking on behalf of the man to the handful of police officers who had arrived on scene.

Footage and photos from the incident showed Denzel during this act of kindness, placing a hand on the mans shoulder in support and sticking by him while the police did their job.

He even tried to give the stranger a sandwich as well as a face mask to protect him from the coronavirus as the homeless man wasn’t wearing one.

Washington, who is famous for his storied career in front of the camera, has quietly made a reputation for himself off-screen, along with his wife Pauletta, as being some of Hollywood’s most generous people.

Over the years he has donated to worthy charities like Fisher House, which helps military families, by giving them one of the ‘most substantial donations’ they had received in the early 2000s.

He pledged $1M to the Wiley College debate team, which served as the inspiration for this 2007 drama The Great Debaters.

In addition to financial support, the Washington’s also once opened their home to actor Omari Hardwick of Power fame who was down and out and had met them while substitute teaching at their son’s school.

‘Pauletta Washington paid, and this is the first time I’ve ever probably said it on camera, she paid for my car, you know, to not be taken back. They paid for it,’ Omari recalled last year during an appearance on The Real.

‘She called and said, “I got to get down Denzel’s approval first”, but he was like “all good.” When I finally paid him that check back, it was big. They framed that check.’

‘That’s what it’s all about, I mean you can’t take it with you,’ he told Forbes during a 2018 interview about his philanthropic work.