WATCH: Atlanta Security Guard Beaten by Gang of Girls After He Found Them Smoking Weed Outside Hotel and Told Them to Leave

This is the shocking moment a gang of girls beat up a security guard when he refused to let them board the elevator at an Atlanta hotel.

The male security guard told Atlanta Police that he approached the women when he found them smoking weed outside the Hyatt Palace Hotel. He said that he asked for their room number which they refused to provide.

After asking them to leave, the women – who were accompanied by a group of men – pushed through the entrance to the four-star hotel and tried to jump on the elevator.

Footage then shows a wild brawl then broke out with the guard, wearing a face mask, being viciously assaulted for trying to stop them boarding the elevator. 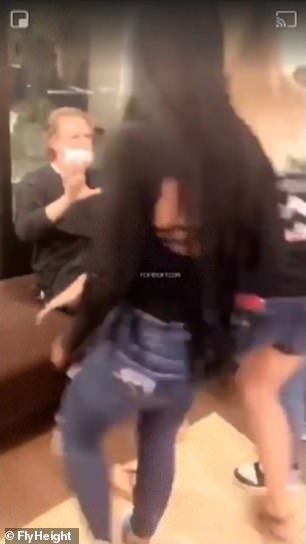 As the women try to get past the guard, he shouts ‘no’ and keeps them away from the doors.

The fight begins when he forcefully pushes one of the women away.

The pushed woman rains down blow after blow on the back of his head. He can be seen turning his body to stop the flailing fists connecting with his face.

Another woman wearing light blue jeans and a blue hoodie punches him in the jaw and the man falls back on to a chair.

He tells the women to stop, holding his hands out to defend himself, but they carry on hitting him. 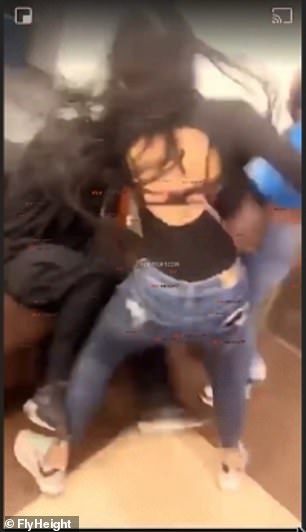 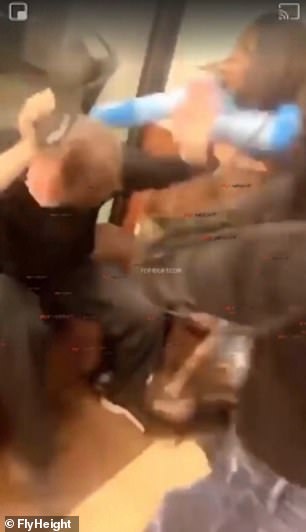 Meanwhile, the men in the video can be heard cheering the attackers on.

The altercation ends with the two women hitting the man with a flurry of punches, both at the same time.

Atlanta PD said they were yet to identify the women in the video but that the security guard plans to press charges once they are found.