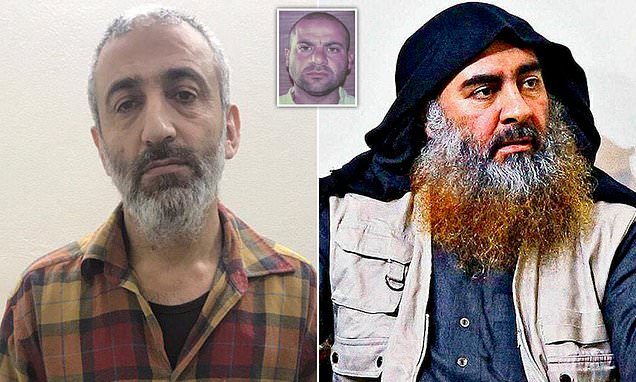 The new ISIS leader has been arrested by Iraqi intelligence officers, according to local reports.

Abdul Nasser Qirdash, ‘the candidate to succeed the terrorist Abu Bakr Al-Baghdadi’ was captured, according to the National Iraqi News Agency. It is unclear where or how the new caliph was detained.

A photograph obtained by a local journalist and posted online purports to show the jihadist, a veteran who had served ‘since the days of Abu Musab al-Zarqawi.’

But aspersions have been cast on the claims of the Iraqi news agency, not least because the photo does not match with previous photos of Baghdadi’s successor.

After Baghdadi’s death it was reported that Muhammad al-Mawla, who also used the nom de guerre Abdullah Qardash and was nicknamed The Professor, was to take over as the caliph.

The source told the Iraqi news agency: ‘The terrorist (Qirdash) served as the head of the commission authorised by the terrorist organisation Daesh, and he worked with the organisation as a leader from the time of the terrorist Abu Musab al-Zarqawi until the battles of al-Baghouz that he led himself.’

Baghdadi famously ‘died like a dog,’ as Donald Trump put it, when US forces stormed his compound in northwestern Syria in October 2019.

Baghdadi, who had steered ISIS’s foul terror across the world, blew himself up with a suicide vest, along with three of his children, when he was cornered by special forces.

The man tipped to succeed him as Abdullah Qardash, a former officer in Saddam Hussein’s military who was in charge of ‘Muslim Affairs’ under Baghdadi’s reign.

However, it is not even clear that Qardash did take over as leader because the group became fractured after it was routed at its final stronghold at Baghouz.

It could be that the man captured is another leader of ISIS.

The Iraqi security forces are nor reliable sources of information and so the information must be viewed with ample circumspection.