Coronavirus rages on: Worst day yet for new cases as WHO records 106,000 people newly infected around the world 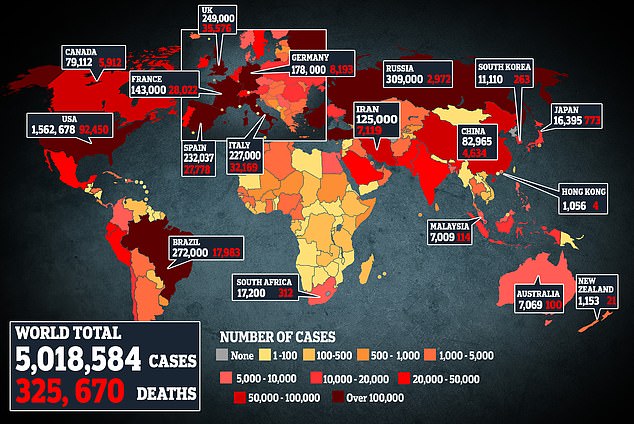 The worst day yet for new cases of coronavirus cases has been recorded, with 106,000 people newly infected around the world, the WHO said on Wednesday.

The UN health agency’s chief Tedros Adhanom Ghebreyesus said on Tuesday there were 106,000 cases reported to WHO – the most in a single day since the outbreak began’ in December.

The new figures come after states around the world have been dramatically ramping up their testing programmes.

‘We still have a long way to go in this pandemic,’ Tedros told a virtual press conference as his agency warned of rising infection figures in poorer countries.

More than 4.9 million cases of the novel coronavirus have been registered in total since the outbreak first emerged in China last December, according to a tally from official sources compiled by AFP.

WHO emergencies director Michael Ryan said the five million cases mark would be a ‘tragic milestone’.

Tedros added: ‘We’re very concerned about the rising numbers of cases in low- and middle-income countries.’

More than 325,000 people have lost their lives, according to the AFP tally.

The WHO’s annual gathering of member states agreed Tuesday to an independent probe into the UN agency’s coronavirus response amid mounting US criticism over its handling of the pandemic.

Donald Trump made public later Tuesday a letter he sent to Tedros, saying that if the WHO did not commit to ‘major substantive improvements’ within 30 days, he would permanently freeze funding to the organisation and reconsider US membership.