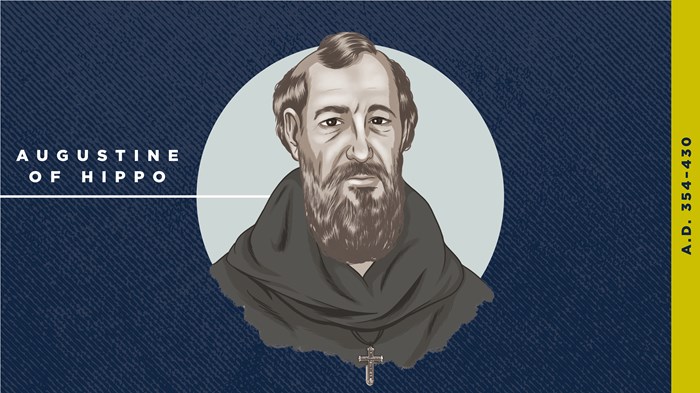 Daniel J. Brendsel is pastor of college and 20s life and corporate worship at Grace Church of DuPage in Warrenville, Illinois.

I am annoyed because of the demands which are thrust on me to write, arriving unannounced from here, there and everywhere. They interrupt and hold up all the other things we have so neatly lined up in order. They never seem to stop and can’t be put aside.
— Augustine of Hippo, from a letter to Possidius

About halfway through my second year of seminary, I found myself deep in the throes of a major research paper. I don’t remember exactly what the paper was about, but I am sure it was a matter of some great exegetical and theological import. At the time, I was also meaningfully involved in the shepherding ministry of our local church, so it was no surprise when I received an urgent call asking for my help.

A young husband (let’s call him Jack) wanted me to intervene after a tense confrontation between him and his new wife (we’ll call her Kate). This conflict had been simmering for some time. It included challenges related to mental health and suicidal tendencies, which I was far from comfortable with or capable of addressing.

When the call came, I am ashamed to say, my gut response was, No, not now! It was not that I did not want to attend to the need per se, nor that I could not spare a few minutes. Rather, it was because I knew the crisis would need much more than a few minutes—it would throw my plans for the day into shambles.

Despite my frustration, I agreed to come over. As I walked into their apartment, I saw food that had been thrown against the wall in anger during their fight. Jack sat alone on the couch with no sign of Kate. Compassion and adrenaline immediately kicked in. I did the only wise thing I could do: I picked up a towel, began cleaning the walls, and listened to Jack explain what had happened.

Many phone calls followed—to the pastoral staff of our church, to friends who might know Kate’s whereabouts, and to local authorities. Eventually, through the Lord’s goodness and provision, we located her. We met with her and persuaded her and Jack to seek further help. By evening’s end—or was it early morning the following day?—I found myself in the mental health wing of the local hospital speaking with nurses and doctors. After arranging things with the hospital staff, I slumped down in the waiting room to watch the end of Ratatouille on cable television, my seminary paper no closer to completion than when I’d gotten the call from Jack.

As I have reflected on that episode in the years since, one thing that has continually pressed upon my conscience is my initial heart response: No, not now! Without trying to impute every manner of sinfulness and selfishness to my immediate reaction, I now see that there were a number of foolish impulses present then that I am prayerfully seeking to grow out of today. But it took an encounter with Augustine of Hippo to recognize those impulses for what they were and to articulate their disordered nature.

In the epilogue to the second edition of Augustine of Hippo (2000), Peter Brown discusses primary source material from Augustine’s life that was discovered after Brown first published his biography of the church father in 1967. When Brown was first writing, the limited evidence available on Augustine’s later life led Brown to characterize him as a tired old man—burnt out, rigid, and crotchety.

In the 1970s and 1980s, with the discovery and publication of 29 of Augustine’s personal letters from roughly the final decade of his life, new light was shed on the venerable African theologian, which allows us to set his other writings from that time into a proper context. According to Brown,

[Augustine’s] letters are marked by an inspired fussiness, and by a heroic lack of measure when it came to the care of endangered souls. There is nothing “burnt out” in the seventy-year-old man who would spend the time to interview a young girl terrorized by slave-traders and who would go out of his way (as part of an effort to encourage the father to accept Christian baptism) to ask to see the school exercises . . . of a teenage boy. The letters make plain that the old Augustine was prepared to give his unstinting attention to any problem that might trouble the faithful, no matter how busy he was, no matter how trivial or how ill-framed the problem seemed to be, and no matter how remote from Hippo, or how eccentric, its proponents were.

These newly discovered letters reveal a man who was, in Brown’s words, “characterized by constant quiet acts of self-sacrifice as Augustine lent his pen, again and again, to the defence of the Church, at the expense of intellectual projects that engaged him more deeply.”

I first read Brown’s biography about a decade ago, a few years out of seminary and just prior to accepting my first full-time pastoral position in a local church. The book was a gift of divine providence preparing me for my calling and helping me understand the significance of my inclination toward No, not now! Augustine, as revealed in these late-in-life letters, has challenged and inspired my pastoral labors. With God’s help, I hope my ministry will resemble Augustine’s in three important ways.

First, Augustine challenges me to root my priorities in the local church. Before reading Brown’s biography, I viewed Augustine primarily as a theological giant whose writings were the most significant aspect of his service to the church. But the letters from Augustine’s later life reveal that his writings were only one element of a much broader devotion to the church. Despite how busy he was with other projects, his habit in later years was to give his attention quickly and particularly to the interruptions of mundane and local needs, even if he approached them with “a constant sigh of resignation,” as Brown writes.

Encountering this Augustine has been crucial in shaping my pastoral imagination. Here was a theologically incisive leader of the global church who also attended to the ordinary needs of a specific time and place. He did his best not to pit his writing for the wider public against, for example, aiding a young woman in his community who was harassed by slave traders. In fact, it seems that attentiveness to immediate and concrete needs was his first priority. Augustine apparently took the warning of Proverbs 17:24 to heart: “A fool’s eyes wander to the ends of the earth.” Augustine’s eyes remained fixed on the people and needs before him, and for that reason, arguably, he had something worth saying to those in different places and times.

Developing theological acumen, tackling global needs, and laboring to change the world are all high and holy work. For that reason, these aspirations can beguile us into thinking that local and pressing needs are distractions from what’s really important. I was blinded at first to the true importance of Jack and Kate’s on-the-ground crisis because I had an “important” paper to write. But the pastor’s chief calling is always, first, to speak the truth in love to a specific brother or sister, to serve neighbors and neighborhoods, and to minister for the good of a particular place.

Augustine’s life has been a lodestar in my calling to be a faithful pastor-theologian, even as it has also served as a rebuke when I buy into the lie that the needs of my local body are distractions from the “real” theological labor of sermon preparation, programmed catechesis, personal reading and research, conferences, and writing.