Doctor Michael Osterholm Says Coronavirus Will Spread Until Up to 70 Percent of U.S. Population is Infected

A top infectious disease expert has predicted that coronavirus will continue to spread until some two thirds of the world’s population has been infected.

Dr. Michael Osterholm, director of the Center for Infectious Disease Research and Policy at the University of Minnesota, issued the dire prediction in an interview with USA Today on Monday.

‘We all have to confront the fact there’s not a magic bullet, short of a vaccine, that’s going to make this go away,’ he said. ‘We’re going to be living with it. And we’re not having that discussion at all.’

Osterholm said that without a vaccine, which is likely more than a year away, the virus will continue to spread until it is halted by herd immunity, which he estimates would kick in after 60 percent to 70 percent of the population has been infected.

‘This damn virus is going to keep going until it infects everybody it possibly can,’ Osterholm said. ‘It surely won’t slow down until it hits 60 to 70 percent.’ 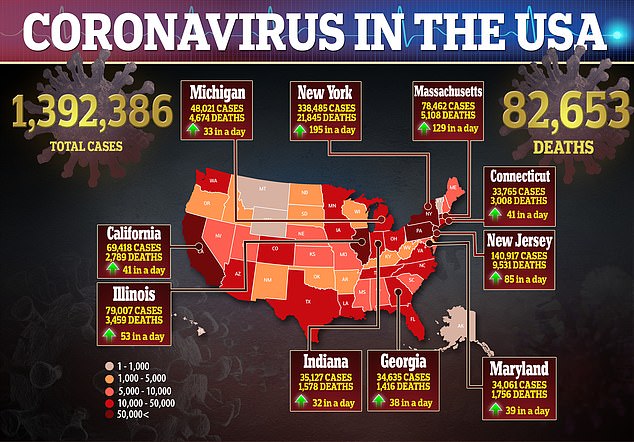 Herd immunity stops the spread of a pathogen when enough of the population has immunity to cut off its ability to infect new carriers.

Post-infection immunity to coronavirus is still not well understood, but people who recover from closely related SARS and MERS are typically immune for several years.

Osterholm said that even if cases drop off over the summer, it could be a sign that coronavirus is seasonal, like influenza, and that cases could surge again in the fall.

‘It’s the big peak that’s really going to do us in,’ he said. ‘As much pain, suffering, death and economic disruption we’ve had, there’s been 5 to 20 percent of the people infected, … That’s a long ways to get to 60 to 70 percent.’

Antibody testing in New York City indicates that about 20 percent of the population there, or 2.6 million people, have been infected and safely recovered from coronavirus.

Coronavirus causes mild or no symptoms in many people, but for the elderly and those with underlying conditions, it can cause serious complications or death.

Osterholm’s predictions come as many states debate how to attempt reopening their economies, balancing the threat of the virus against the economic devastation caused by the lockdowns.

At least 30 million Americans have been put out of work since the start of the outbreak, sending the unemployment rate to its highest level since the Great Depression.