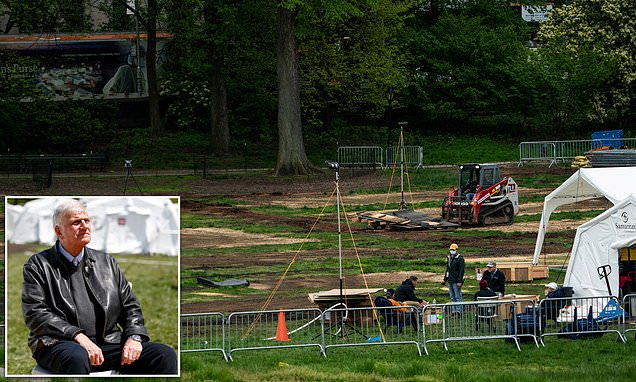 The makeshift Central Park hospital set up by evangelist Billy Graham’s preacher son Franklin is being dismantled after the site discharged its final coronavirus patients.

Pictures show the 14 tents being taken down on Monday after they were set up to help the nearby emergency room at Mt Sinai Hospital by Fifth Avenue. The 68-bed respiratory care unit had opened on April 1.

The East Meadow site had been set up with help from Samaritan’s Purse, an evangelical Christian relief organization headed by Franklin Graham. He traveled to the site last week to thank those who worked there, telling them: ‘This hospital has been a beacon of life and a beacon of hope. You’ve been able to touch lives.’

Hospitals in the city had struggled to keep up with the exploding number of critical patients, prompting many to expand to temporary facilities.

Samaritan’s Purse treated more than 300 coronavirus patients in New York, including 190 at the Central Park site. More than 240 relief specialists served there at various times.

But the aid did not come without criticism; at one stage Graham said he was being harassed for insisting that his hospital workers are opposed to gay marriage.

He makes all volunteers agree to a Statement of Faith which includes the line ‘marriage is exclusively the union of one genetic male and one genetic female’.