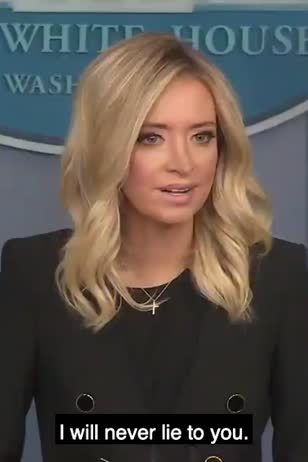 Kayleigh McEnany took the podium for the first time as the White House Press Secretary Friday and pledged never to lie to the media. She got asked point-blank at the first formal briefing in 417 days at a time of tense relations between reporters and the Trump White House whether she would always tell the truth. ‘I will never lie to you, you have my word on that,’ she responded. The telegenic former Trump campaign spokeswoman fielded a series of questions on topics ranging from the coronavirus pandemic to her own plans for communicating with the press and the American people. She declared the president’s ‘total exoneration’ in the Russia probe, called fired national security advisor Mike Flynn an ‘honorable man,’ and plugged an upcoming Trump appearance on Fox News.