The long-awaited opening of Pope Pius XII’s wartime records only lasted a week before the coronavirus shut the Vatican archives down again, but that was long enough for documents to emerge that reflect badly on the pontiff accused of silence during the Holocaust, according to published reports.

In that week alone, German researchers found that the pope, who never directly criticized the Nazi slaughter of Jews, knew from his own sources about Berlin’s death campaign early on. But he kept this from the U.S. government after an aide argued that Jews and Ukrainians — his main sources — could not be trusted because they lied and exaggerated, according to the researchers.

The researchers also discovered the Vatican hid these and other sensitive documents presumably to protect Pius’ image, a finding that will embarrass the Roman Catholic Church still struggling with its covering up of the clerical sexual abuse crisis.

These reports are coming out in Germany, home to seven researchers from the University of Münster who went to Rome despite the coronavirus crisis there for the historic opening of Pius’ wartime papers on March 2. Other researchers from the United States and Israel had been expected to attend the opening but apparently stayed home because of the pandemic.

Leading the German team was Hubert Wolf, 60, a historian of the Catholic Church who has researched in the Vatican’s Secret Archive — now called the Apostolic Archive — since his student days. A Catholic priest and prolific author, he enjoys a reputation as an objective researcher and outspoken analyst.

“We have to first check these newly available sources,” he told Kirche + Leben, the Catholic weekly in Münster, last Friday. “If Pius XII comes out of this study of the sources looking better, that’s wonderful. If he comes out looking worse, we have to accept that, too.”

The stakes are high. 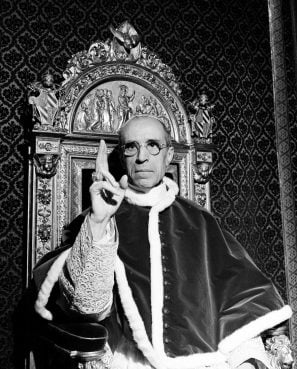 In this file photo dated Sept. 1945,
Pope Pius XII, wearing the ring of St.
Peter, raises his right hand in a papal
blessing at the Vatican. (AP Photo, File)

Pius XII, who headed the Catholic Church from 1939 to 1958, was the most controversial pontiff of the 20th century. His failure to denounce the Holocaust publicly earned him the title of “Hitler’s pope,” and critics — especially among Jewish historians, but not only them — have for decades asked for his wartime archives to be opened for scrutiny.

The pope’s defenders have long argued he could not speak out more clearly for fear of a Nazi backlash and cite his decision to hide Jews at the Vatican and in churches and monasteries as proof of his good deeds. They note the Vatican had already published an 11-volume series of documents selected from his archives to prove his innocence.

A joint Catholic-Jewish commission that was launched in 1999 to seek to resolve this case broke up two years later because the Vatican would not open up its archive, which was supposed to stay sealed until 2028.

Now the archive has been opened, and the Münster team of researchers has begun to publish its first findings; they do not look good for Pius or the Catholic Church. The details are a bit complicated, but Wolf’s conclusions are quite clear.

The chain of events goes back to September 27, 1942, when a U.S. diplomat gave the Vatican a secret report on the mass murder of Jews from the Warsaw Ghetto. It said about 100,000 had been massacred in and around Warsaw and added that another 50,000 were killed in Lviv in German-occupied Ukraine.

The report was based on information from the Geneva office of the Jewish Agency for Palestine. Washington wanted to know if the Vatican, which received information from Catholics around the world, could confirm this from its own sources. If it could, would the Vatican have any ideas about how to rally public opinion against these crimes?

The archive included a note confirming that Pius read the American report. It also had two letters to the Vatican independently corroborating the reports of massacres in Warsaw and Lviv, according to the researchers.

A month before the American request, the Ukrainian Greek Catholic archbishop of Lviv, Andrey Sheptytsky, had sent Pius a letter that spoke of 200,000 Jews massacred in Ukraine under the “outright diabolical” German occupation.