Jen Hatmaker on Her New Book ‘Fierce, Free, and Full of Fire: The Guide to Being Glorious You’

Jen Hatmaker knows the cost of standing up for what she believes in.

Once a “darling” of evangelical Christianity, LifeWay Christian Stores pulled Hatmaker’s books from its shelves in 2016 after she expressed support for the LGBTQ community in an interview with Religion News Service. Her popular book “7: An Experimental Mutiny Against Excess” was put out of print, she said. Her next book contract was canceled, too.

Hit pieces followed. So did the nightmares.

But the freedom that came with it has been worth it, according to the bestselling author and speaker.

“The only regret I have is that I did not do this sooner,” Hatmaker said.

In her book “Fierce, Free and Full of Fire: The Guide to Being Glorious You,” released earlier this week, she encourages her readers to experience the same freedom she has found by living into their authentic selves, no matter what the cost.

“It is daunting for so many women to even just imagine staring down a brand new path of truth telling. I know it,” she said.

Hatmaker spoke to RNS about her latest book, what she learned from her experiences as an outlier in evangelicalism and what is making her feel hopeful during the coronavirus pandemic.

You have described this book as “the one where I laid it down.” How does this topic lend itself to laying it all out there?

This book essentially is the culmination of probably the most important work of my adult life — of ownership and agency, of integration and honesty. I’ve always told a little bit of the truth in everything I’ve written, but this is all of it. This is the whole story. This is everything that has served me and brought me into probably the first place of freedom I’ve ever actually lived in as a grownup. 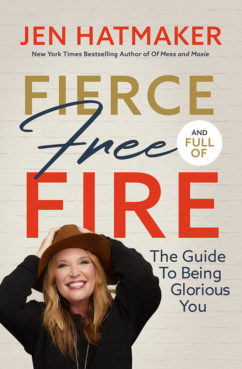 “Fierce, Free and Full of Fire:
The Guide to Being Glorious You”
by Jen Hatmaker. Courtesy image

I didn’t expect obviously to release this in the middle of a pandemic. That is unfortunate, for sure, except it’s never the wrong time for women to decide to live in the authority of their own life in full freedom. So why not now?

In a recent Facebook Live, you said, “I think books mean something right now.” What do you think books like “Fierce, Free and Full of Fire” have to offer in this pandemic moment?

This is a real tragedy. It’s scary, and people are worried, and some people are sick, and there’s loss everywhere. Weirdly, inside of all of that suffering exists the possibility of an invitation to really evaluate, like, who am I, where am I, where have I been, and where am I going? Because so many things that generally require our attention have been pushed off our plates. And so it is possible right now to get a little bit still and to get a little bit quiet and to let words and stories and ideas move us and affect us and change us like they always have — like they still can even now. And so books still matter.

I’m finding that people’s words are reaching me in a real tender way right now, maybe even more so than when I am busy and distracted and overextended. I hope that for “Fierce,” obviously, but all the words right now that creators and leaders are putting out into the world can serve the community as we begin to steer the ship into recovery.

You share a few stories about your experiences as an outlier in evangelical Christian subculture, including the fallout after you publicly affirmed LGBTQ Christians. You describe all the losses that followed and how hard that was for you and your family. And you conclude, “I am recovered enough to finally say: I did not deserve that.” You mention this is “a little story I’ve never talked about in full.” Why now?

I was very much a darling of white evangelical women subculture. It’s a real niche, but I was succeeding there and I was beloved there and very favored and very centered, and I built an entire ministry there, a whole career. What was so devastating at the beginning was noticing all the places that, for me, the fabric was beginning to tear. And it was in more than one way. It was being located inside a system that was still very much operating under the rules of patriarchy and misogyny — nobody would want to admit this, but white supremacy and privilege, power differentials, where it was very clear who was right and wrong; who was in, who was out; who was included, who was excluded.