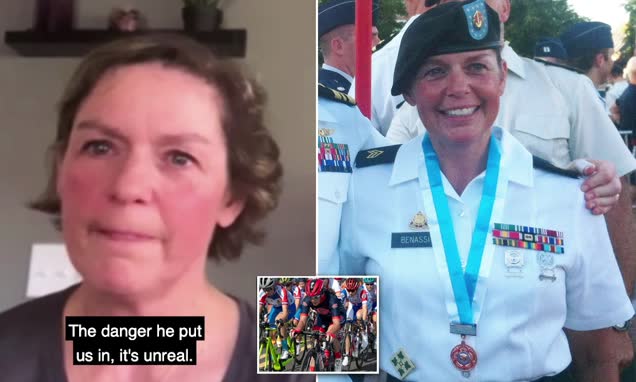 A US Army reservist at the center of an unfounded online conspiracy theory that identifies her as ‘patient zero’ of COVID-19 and claims she brought it to Wuhan has said she’s now living in fear for her life.

Maatje Benassi and her husband Matt described the ‘nightmare’ of the ordeal to CNN, as the theory began spreading on Chinese social media and has even been embraced by Communist Party in Beijing.

Though Benassi has never tested positive or exhibited any symptoms, she has been accused by conspiracy theorists of conspiring with the US government and bringing COVID-19 to China last October, when she competed as a cyclist in the Military World Games.

After the conspiracy was first peddled in March, Benassi says she has been inundated with death threats from believers of the theory and has even had ominous letters posted through her door after the couple’s home address was posted online.

‘It’s like waking up from a bad dream going into a nightmare day after day,’ Benassi told CNN in her first public interview about the matter.

Much like coronavirus itself, misinformation about the pandemic has continued to spread and mutate online, even as technology giants such as Google and Facebook have taken measures to try and block the circulation of any dangerous fallacies.

During the first few weeks of the outbreak, hundreds of conspiracy theories – without any basis in fact – emerged, claiming that COVID-19 was a biological weapon created by the US Government.

It wasn’t until March – several months after the first recorded case of coronavirus in Wuhan – that conspiracy theorists turned their attentions to Benassi, a civilian employee at the US Army’s Fort Belvoir in Virginia.

Benassi had competed as a cyclist for the US in Wuhan’s Military World Games five months before. Though the competition would end for her in a nasty crash on her final lap leaving her with a concussion and a broken rib, the mother-of-two says what followed has been far more painful.

One of the most vocal conspiracy theorists about the imaginary plot involving Benassi is George Webb, a 59-year-old American YouTuber, who has amassed a following of nearly 100,000 people and 27 million views on his conspiracy channel.

Webb claims that the novel coronavirus was manufactured in a U.S. military lab and brought to China by Benassi during the military Olympics.

The couple’s inboxes have since been flooded with hateful and threatening messages from all over the world, strange letters have been posted through their front door and comments calling for them to be ‘executed’ or ‘killed by firing squad’ are uploaded hourly beneath Webb’s videos.