In New York City hundreds of people lined up outside the Bowery Mission homeless center for a free Easter Sunday meal, as desperation grows in the country amid the coronavirus crisis.

Locals were seen lining up along the block Sunday afternoon, many of them wearing hats, masks and gloves and practicing social distancing, as they waited for their hot meal.

The homeless center has served the needs of the city’s poor and hungry who arrive to its iconic red doors since the 1870’s.

The lines were longer than usual as the city reels from the impact of the coronavirus outbreak which has shuttered businesses, let to a spike in over 16million Americans being unemployed, and has left many families struggling to make ends meet.

On Friday it was reported that the Mission in Manhattan was seeing double the lines for regular meal distributions – a sign that food security has become an issue for New Yorkers.

‘This Easter weekend, our thoughts are with you amidst all the uncertainty and challenges facing our community and city. And we remain hopeful because of the promises of God’s love, often shown through the compassion of friends like you. So we want to say: Thank you,’ the Bowery Mission shared on social media.

‘Many guests coming to our Red Doors today have fallen on hard times. We’ve seen more and more new faces, with new worries due to recent events. Your support has reminded them that they are not alone!’ the group added. 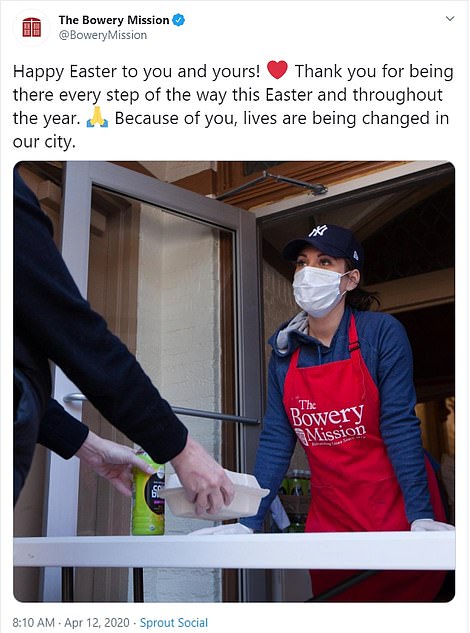 The mission said it would serve over 60,000 meals to hungry New Yorkers on Easter.

In New York, the global epicenter of the outbreak, there are 188,000 cases of the virus in the state and over 9,000 deaths as of Saturday evening.

The outbreak has seen states lockdown, businesses close and cause unemployment to surge as fears over the nation’s stability spreads.

The Trump administration has said May 1 is the target date for relaxing the stay-at-home restrictions, the commissioner of the Food and Drug Administration, Stephen Hahn, said on Sunday.

But he cautioned that it was still too early to say whether that goal is actually feasible.

‘We see light at the end of the tunnel,’ Hahn told ABC’s This Week adding, ‘Public safety and the welfare of the American people has to come first. That has to ultimately drive these decisions.’

Feeding America – the largest hunger-relief organization in the country – estimates it will need to feed an additional 17.1million people in the pandemic – many of whom are replying on food banks for the first time.

This, on top of the 37million people that were previously food insecure, including 11million children and 5.5million seniors.

‘For the first time probably in our history, we’ve had to turn some people away,’ she said, not that ‘We don’t want to do that, ever.’

Sunday marked a somber Easter celebration for the country as mass services and gatherings are not allowed amid stay-at-home orders.

In Italy Pope Francis shared a solemn Easter Sunday service from the nearly empty St. Peter’s Basilica where he said: ‘This is an Easter of solitude lived amid the sorrow and hardship the pandemic is causing, whether from physical suffering or economic difficulties.’

In the US, some defiant religious and political leaders argued their right to worship is more important than social distancing warnings and insisted on gathering.

Reverend Tony Spell told Reuters he expected more than 2,000 to congregate for services on Sunday at his evangelical Life Tabernacle megachurch near Baton Rouge, Louisiana.

‘While social distancing policies are appropriate during this emergency, they must be applied evenhandedly & not single out religious orgs,’ Kupac wrote. ‘Expect action from DOJ next week!’

In Kentucky Governor Andy Beshear warned anyone that attended a mass gathering may have their license plates recorded so attendees can be contacted by the government and be ordered to self-quarantine for 14 days.

Many US churches opted for online, live-streamed messages.

The White House also felt the impact of the stay-at-home restrictions.

The annual White House Eater egg roll, which dates back to 1878, was also cancelled in light of the pandemic.