Thomas Reese on is Trump Endangering His Supporters With His Views on the Coronavirus?

Has President Donald Trump put the lives of his supporters at risk because of his early downplaying of the coronavirus epidemic?

Although he now is saying 100,000 deaths will be a win, for months the president ignored warnings from professionals and told the country not to worry.

In January, he said that the situation was “under control” and “it’s going to be just fine.” “We have very little problem in this country,” he said later in January. As late as March 5, he tweeted that we had “only 129 cases.” On March 12, he said we have “very few cases” compared with other countries. Numerous times he compared the virus to the flu.

Republicans are inclined to believe and defend anything the president says, while Democrats are skeptical of anything he says.

This also applies to the coronavirus. According to a poll taken by the Pew Research Center in mid-March, “59% of Democrats and Democratic-leaning independents say the outbreak is a major threat to the health of the U.S. population as a whole; only 33% of Republicans and Republican leaners say the same.”

The same survey found that 76% of Republicans thought the media exaggerated the risks of the virus, while only 49% of Democrats felt the same way. 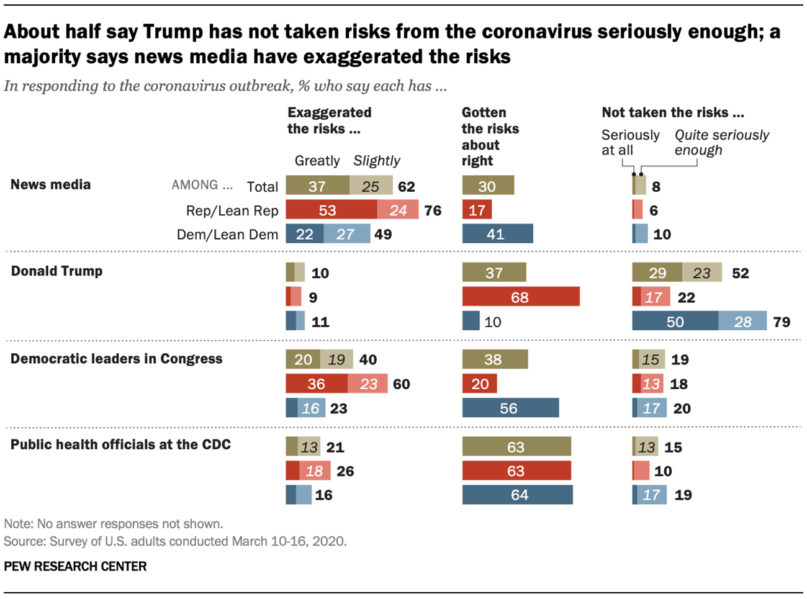 “About half say Trump has not taken risks from the coronavirus seriously enough; a majority says news media have exaggerated the risks” Graphic courtesy of Pew Research Center

Likewise evangelical Christians. The same Pew survey found that in mid-March, 77% of white evangelicals were confident that Trump was doing a good job responding to the coronavirus outbreak. Other religious groups were more skeptical. Only 52% of Catholics, for example, felt the same. For the unaffiliated, the number was 28%.

When the coronavirus epidemic is over, social scientists are going to have a field day examining the impact of Trump’s leadership, or lack of it, on the contagion.