Mark Silk on a Sermon on the Coronavirus and Climate Change

As you sit in your homes, watching your screens and homeschooling your kids and hoping you have enough provisions and praying that none of your friends and loved ones gets sick, I’ve been thinking about epidemics and what they mean for us human beings. To help me do that, I pulled off the shelf Nobel Prize-winner Albert Camus’ “The Plague.”

It’s a novel about an epidemic that comes to the Algerian coastal city of Oran in the 1940s, when Algeria was part of France. At a crucial moment, the learned Jesuit priest, Father Paneloux, delivers a sermon from the pulpit of the big cathedral.

If today the plague is in your midst, that is because the hour has struck for taking thought. The just man need have no fear, but the evildoer has good cause to tremble. For plague is the flail of God and the world His threshing-floor, and implacably He will thresh out His harvest until the wheat is separated from the chaff.

I’m afraid that that’s my message for you, too, today. This plague we’re going through, this pandemic, has also struck the hour for taking thought. It also represents a divine flail.

But I see it less as a means of separating the wheat from the chaff, the good people from the bad, than as a spur to action. And not just for you and me. Pandemic comes from the Greek words for “all” and “people,” the point being that this is something that affects everyone on Earth.

What else affects everyone on Earth these days? Why, climate change of course. Wherever you live, no matter north or south, east or west; whatever your race, religion, ethnic group or nationality; rich or poor; we are all one in having to face the effects of our species’ blasting of greenhouse gases into the atmosphere.

Now, I can hear (in my mind’s ear) some of you muttering to yourselves, “Oh, there he goes again. Another sermon on global warming.” Well, OK. I’ll plead guilty to that.

But then I hear others protesting, “Would God really kill off thousands of people in order to teach the rest of us a lesson?” To be honest, that’s a harder question.

Father Paneloux insists that the plague in Oran “was not willed by God.” Rather, God “grew weary of waiting” for the people to stop sinning and, he says, “has turned his face away from us. And so, God’s light withdrawn, we walk in darkness, in the thick darkness of this plague.” 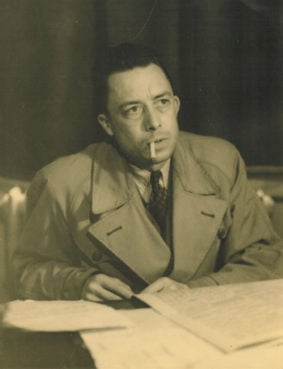 Camus tells us that Father Paneloux is a scholar of St. Augustine of Hippo, and here we have the Augustinian view that evil is privation of good, that by depriving us of God’s goodness, God enables evil — good’s absence — to take its course.

Well, you might say, “Same diff as if God willed the pandemic,” and I’m not sure I disagree. But however we split this theological hair, the fact is that a lot of people are dying, and the world economy is going to pot.

Sure, God has grown weary of waiting for us to get serious about climate change. That’s a big price to pay, and for what?

As we approach the great Judeo-Christian holiday of Passover, let us think for a moment about frogs. Frogs were one of the plagues sent by God to persuade Pharaoh to let the Israelites go. Now imagine that we are the frogs.

Actually, such imagining has become a trope when we talk about climate change. We are frogs in a big pot of water that’s on the stove, and because the water is only slowly coming to a boil, we don’t notice until it’s too late. We’re goners.

COVID-19 is all about throwing us frogs right into boiling water. Almost before we know it, Bam!