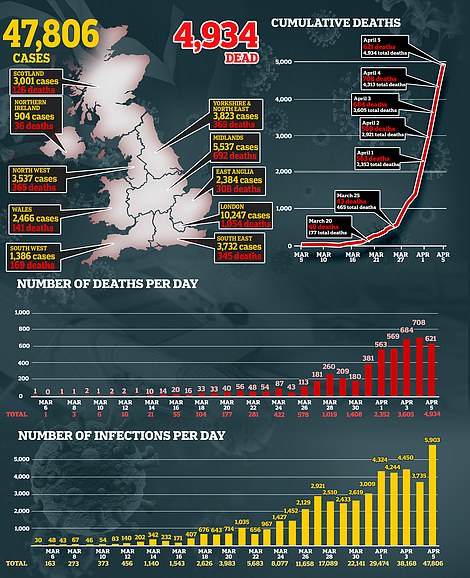 Britain’s coronavirus death toll has gone up by 621 to 4,934 – including 29 patients who did not have any underlying health conditions.

The patients were between 33 years and 103 years old, with 29 of them, aged between 35 and 95 years old, having no known underlying health conditions.

The level of infections has risen sharply by almost 60 per cent, from 5,903 to 47,806, dashing hopes the rate of people getting the disease was starting to level out.

Just days ago, Stephen Powis, the medical director of England, said there had been a ‘bit of a plateau’ in the number of people testing positive.

It comes amid concerns a huge backlog of potential patients awaiting their results could mean infections are far higher than is being reported.

If the backlog for processing the tests is too great, the rate of infections will remain at roughly the same level, with the services already pushed to the brink and only able to carry out a certain number of tests per day.

Matthew Lesh, head of research at the Adam Smith Institute, told MailOnline: ‘The UK numbers are masked by the inability of the laboratories.’

Public Health England reported an extra 555 deaths in England, Public Health Wales recorded 12, and there have been 7 in Northern Ireland.

In Scotland, First Minister Nicola Sturgeon said authorities there had recorded an additional two extra deaths in Scotland, up to 220, but said the number was based on a new way of counting deaths and is ‘likely to be artificially low’.

It came as Matt Hancock this afternoon backtracked on a threat to ban outdoor exercise if people do not comply with the coronavirus lockdown.

The Health Secretary this morning blasted sunbathers for flouting the rules and warned the government would ban ‘all forms’ of public exercise if a ‘small minority’ refuse to stay at home.

However he later updated his comments while speaking at the daily Downing Street coronavirus press conference and said he did not want anyone to believe that a further crackdown was in the works.

He then issued a direct plea to people who are ‘breaking the rules or are pushing the boundaries’, telling them: ‘You are risking your own life and the lives of others and you are making it harder for us all.’