Coronavirus Kills 1,047 Victims in 24 Hours and Pushes Nation’s Death Toll to 5,139, as More Than 216,000 Americans Test Positive and Michigan Emerges as Third Deadliest Hotspot Behind NYC and NJ With 337 Fatalities 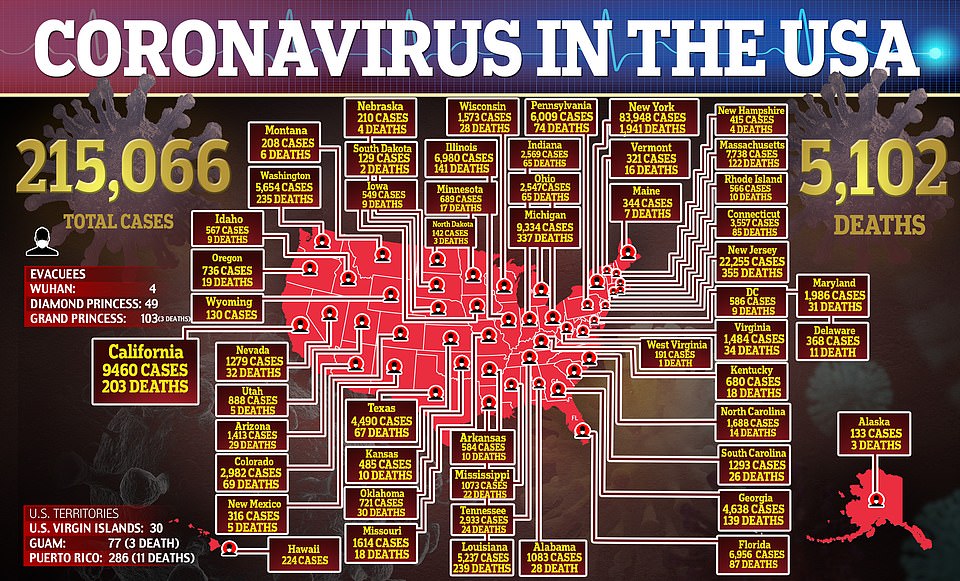 The US death toll from coronavirus skyrocketed in the last 24 hours, taking the number of Americans killed by the virus past 5,000.

The US death toll is now dwarfing the number of deaths officially reported in China (3,309), where the outbreak first originated back in December.

New York state continues to bear the brunt of the US crisis, with its death toll rising to 2,219 and the state’s healthcare system buckling under the demand.

The number of new cases in the state – which has often been described as the epicenter of the US pandemic – reached 7,974 and the total number of infections topped 83,712.

Michigan now has the third highest death toll in the country after reporting a spike in its figures in the last couple of days.

The state’s death toll had reached 337 on Wednesday night, with more than 9,300 confirmed cases.

New Jersey is second behind New York with 355 deaths and 22,255 infections.