The Rev. Molly T. Marshall has stepped down as president of Central Baptist Theological Seminary due to an unspecified “ethical lapse,” according to a statement from the seminary.

Marshall said she offered her resignation effective March 1 “because of an ethical lapse that betrayed my stewardship of office,” according to her statement the seminary released March 30.

“I humbly apologize to the board and the rest of the Central constituency and seek forgiveness. My deepest prayer is for the flourishing of the school and her new president.”

Marshall, a theologian and longtime proponent of women in ministry, said she voluntarily resigned to protect the seminary. She resigned from all her duties as president and professor of theology and spiritual formation.

“As this is a personnel matter, due to confidentiality the board cannot discuss specifics around Dr. Marshall’s resignation,” according to the statement.

The Rev. Robert E. Johnson will now serve as interim president of the seminary.

“As we confront the many challenges presented by this circumstance, we do acknowledge Molly’s leadership of the last sixteen years,” Johnson said. 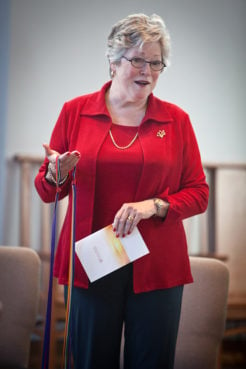 Marshall, before the sudden announcement, had planned to retire this summer. In February, the board of trustees elected Pamela R. Durso as the 11th president of the seminary, which has ties to American Baptist Churches USA, which claims more than 5,000 congregations.

Durso begins her tenure as president on June 1.

A Kansas publication wrote last year about how Marshall “resurrected” Central Baptist Theological Seminary, which had 78 students in 2004 when she became president.

“We flipped her the keys to the Titanic,” is what board members joked when she took on the role, she said in an interview with Flatland, a digital magazine affiliated with KCPT, a Kansas City PBS television station.

The Nashville, Tennessee-based nonprofit Baptist Center for Ethics had planned to release “Brother Molly,” a six-episode documentary podcast chronicling Marshall’s life and work, but that has now been delayed. The series was supposed to go live on March 24.

EthicsDaily.com, a division of the Baptist Center for Ethics, began to work on the podcast in January 2019, according to a statement. Several dozen friends and colleagues of Marshall were interviewed to document her impact on the role of women in ministry, Christian theology, Baptist life and theological education.

The narrative podcast, which was roughly three hours, was also based on extensive interviews with Marshall.

“EthicsDaily has been in communication with Dr. Marshall,” said EthicsDaily Executive Director Mitch Randall in the statement. “In light of recent developments, we have decided to delay release of the podcast while we determine the next best steps for this production on the life and ministry of Molly.”

Marshall, a founding member of Baptist Women in Ministry, has long been known for her advocacy of women’s leadership and has been a critic of the position of the Southern Baptist Convention, which has barred women from pastoral positions. The SBC’s faith statement declares that “the office of pastor is limited to men as qualified by Scripture.”

In 2012, she noted that “Baptists have lost lots of good women to other denominations, Methodists in particular.”

In 1994, Marshall resigned under pressure from Southern Baptist Theological Seminary, the SBC’s flagship school, from which she earned her doctoral degree.

She went on to a position as visiting theology professor at the more moderate Central Baptist Theological Seminary in 1995. She served as the school’s acting dean before becoming its president in 2004.

In the 1996 documentary “Battle for the Minds,” Marshall criticized the stance of Southern Baptist leaders who said women should not teach or have positions where they can rule over men.

She said in the documentary that conservative leaders have used “one or two selective texts” and ignored the “larger themes of the New Testament” when making declarations against women pastors.

Over the course of her career, Marshall has served as a theologian for more than 30 years and has been a youth minister, campus minister and pastor at churches in Arkansas, Kentucky, Oklahoma and Texas.