All schools in England will close on Friday along with those in Scotland, Wales and Northern Ireland as coronavirus continues to wreak havoc in the UK.

Boris Johnson announced the bombshell move this evening and said that when school gates shut at the end of the week they will not reopen for the foreseeable future.

However, a skeleton operation will be kept in place across the country so that the children of key workers – including NHS staff, police officers and supermarket delivery drivers – can be looked after and enable their parents to continue to work.

There was confusion this evening over which professions will be classed as key workers with a full list expected to be published tomorrow and over how they will prove their status to schools.

As Mr Johnson finally announced schools would shut after a number of European countries including France had already sent pupils home, the PM also said GCSE and A Level exams planned for May and June will be cancelled while nurseries and private schools have also been told to close.

Mr Johnson’s announcement – confirmed by Education Secretary Gavin Williamson in a statement to the House of Commons at the same time as the PM’s daily coronavirus press conference – came after the other three Home Nations had already committed to closures.

The number of positive tests for coronavirus in the UK today hit 2,626 while the death toll jumped overnight by 33 to a total of 104.

The Welsh government had said earlier all of its schools will close on Friday while Nicola Sturgeon, the Scottish First Minister, said her country would be doing the same amid claims up to 20 per cent of teachers are in self-isolation.

Ms Sturgeon had already suggested parents are in for the long haul on school closures as she said she could not ‘promise that they will reopen before the summer holidays’.

News of Northern Ireland shutting its schools emerged immediately before Mr Williamson and Mr Johnson announced their plans for education provision in England.

Mr Johnson was under huge pressure to follow the lead of Scotland, Wales and Northern Ireland and he said this evening it was now the ‘right moment’ for English schools to shut ‘for the vast majority of pupils until further notice’ and that the ‘objective is to slow the spread of the virus’.

‘But of course we also need to keep the NHS going and to treat the rising number of cases so we need health workers who are also parents to continue to go to work and we need other critical workers with children to keep doing their jobs too,’ he said.

The PM committed to providing children who receive free school meals with food vouchers to ensure families are not left struggling while on the exam issue, he said tests will ‘not take place as planned’ but pupils ‘will get the qualifications they need and deserve’.

It was not immediately clear this evening how pupils affected by the exam cancellations will have their academic performance assessed.

As well as fears about an impact on staff levels in key services, the government had also been reluctant to proceed with school closures because of concerns shutting classrooms could lead to elderly grandparents being asked to look after grandchildren while parents continue to work.

The over-70s are at increased risk of severe illness from coronavirus and have been urged to avoid all non-essential social contact.

Mr Johnson was unequivocal on the matter as he said ‘children should not be left with older grandparents, or older relatives, who may be particularly vulnerable or fall into some of the vulnerable groups’.

The move to close schools came as the government vowed to increase coronavirus testing in NHS hospitals in order to get a better picture of the scale of the outbreak.

Meanwhile, leading supermarkets introduced forms of rationing to try to stop unnecessary panic buying. There are now calls for ministers to impose a single policy on all stores.

On another day of major developments in the coronavirus outbreak:

Education is a devolved matter in the UK which means devolved administrations have the final say on what happens to schools within their borders.

Minister for Education in the devolved Welsh government Kirsty Williams announced this afternoon that closures in Wales would go ahead.

She said: ‘Today, I can announce we are bringing forward the Easter break for schools in Wales. Schools across Wales will close for statutory provision of education at the latest on 20 March 2020.

‘I have been clear up to now that the continuity of education and the wellbeing of our learners has been at the heart of my decision making. This will always be the case.

‘From next week, schools will have a new purpose. They will help support those most in need, including people involved in the immediate response to the coronavirus outbreak. I am working with my colleagues in the Cabinet, with government officials and our partners in local government to develop and finalise these plans.’

She said those plans would focus on ‘supporting and safeguarding the vulnerable and ensuring continuity of learning’.

Ms Williams said that ‘childcare settings are expected to remain open until we have definitive advice from the Chief Medical Officer and from Public Health Wales that any closures are required’.

Ms Sturgeon said schools in Scotland had now lost too many staff through self-isolation to continue functioning as normal.

She said: ‘My view is that it is now inevitable that we will close schools and nurseries and my planning assumption now is that schools will close to pupils at the end of this week. I wanted today to give parents notice of that now.’

She added: ‘We have the reality on the ground as people do the right thing and follow the advice to self-isolate or to isolate as a household, more and more schools are approaching the point where they have lost too many staff to continue as normal.’

The Scottish First Minister said measures would be put in place to try to ensure doctors, nurses and other critical staff who have children can still work.

‘Lives are on the line if they cannot,’ she said.

Meanwhile, Ms Sturgeon said she did not know when schools in Scotland would be able to reopen.

‘On the question that I know parents and the wider public will have of how long this will last, the clearest guidance I can give now is that people should not assume that schools and nurseries will reopen after the Easter break,’ she said.

‘We will of course only keep them closed for as long as we absolutely have to but at this stage I cannot promise that they will reopen before the summer holidays.’

Mr Johnson had told MPs during PMQs earlier today that decisions on education provision in England would be taken ‘imminently’ in a clear hint towards this evening’s announcement.

He said: ‘We will do everything we can to remove burdens on schools and Ofsted is one in particular we can address. 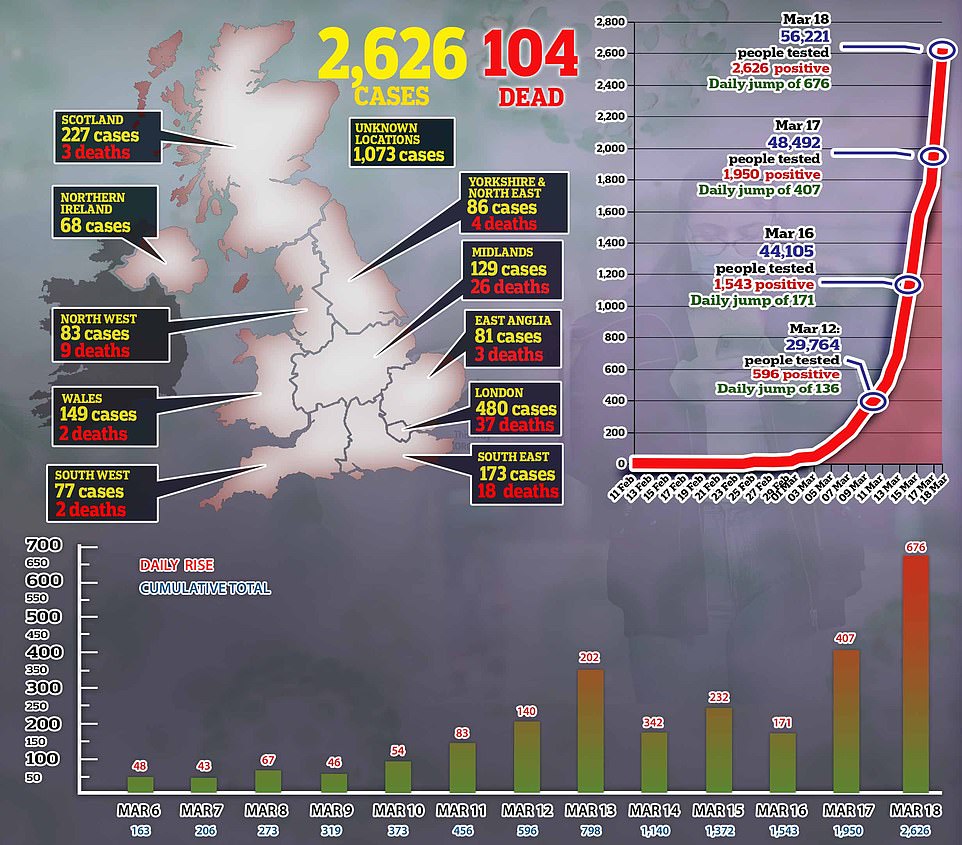 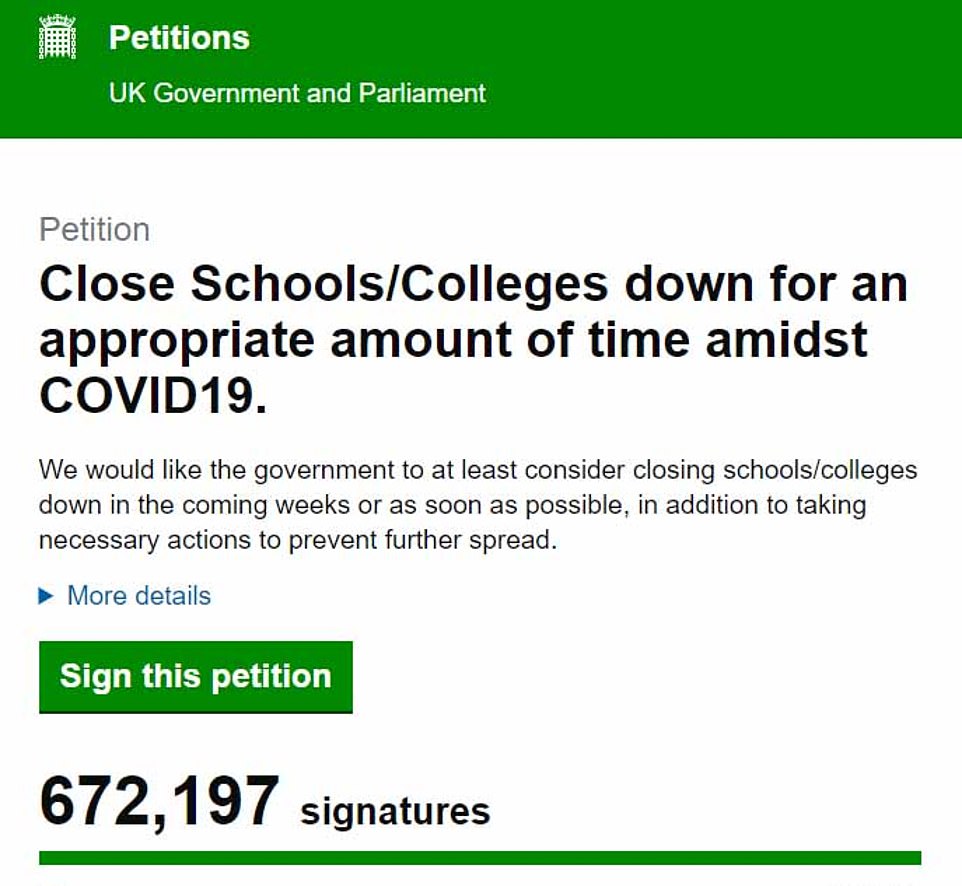 ‘The House should expect further decisions to be taken imminently on schools and how to make sure we square the circle both of making sure we stop the spread of the disease but also making sure we relieve, as much as we can, pressure on our NHS.’

The announcements came after it emerged that pupils in some parts of the country were apparently sitting in empty classrooms while others were believed to be ‘faking coughs’ to stay home amid parents’ fury that schools were still open.

A petition demanding all schools and colleges be shut down for an ‘appropriate amount of time’ has been surging in recent days.

Before the school closure announcements were made, the general secretary of the Association of School and College Leaders, Geoff Barton, had warned many schools would not be able to remain open past the end of the week.

He said roughly 10 to 20 per cent of teachers were self-isolating but the number was ‘rapidly rising’.

Concerned teachers have also claimed as the outbreak has worsened they were unable to keep classrooms clean enough around the clock.

Alderman White School in Bramcote, near Nottingham, had this morning asked parents to keep their children at home today, if they could provide childcare.

It was also announced today that Marlborough College in Wiltshire would move to an ‘online learning environment’ and Eton College – Mr Johnson’s old stomping ground – would also close to pupils. Winchester College is stopping all lessons and sending boys home at 9pm tomorrow evening.

Eton – which has fees of over £14,000 per term – decided to send pupils home this afternoon.

One member of staff at the school, who did not want to be named, said: ‘I don’t think it’s much of a secret. We’re sending the boys home at lunch today.’

A spokesman for Marlborough College said staff wanted to do their best to implement social distancing guidelines set out by the government.

They said: ‘Marlborough College is moving to a “virtual school” environment from 1pm on 18th March.

‘This decision will enable the College to continue to operate, given the increasing numbers of pupils and staff taking precautionary measures to self-isolate or to preempt further global travel restrictions which is making it impossible for the College to provide effective full boarding 24/7 residential care.

‘The College will continue to deliver its timetabled academic lessons, pastoral support and co-curricular provision to pupils remotely, utilising a number of online platforms and delivery methods.

‘The College has no confirmed case of COVID-19 and the campus will not be closed. All members of staff will continue with their duties until the end of term’.

Parents have suggested some children have tried to capitalise on the outbreak in order to avoid going to school.

One said children ‘were not stupid’ and added: ‘Get Boris to close schools! All the children are making up a cough to come home anyway 40 sent home yesterday from one school yesterday and there’s probably nothing wrong with them yet!’

Meanwhile, some schools have reportedly been incorporating cleaning into lesson plans, asking pupils to help keep classrooms as hygienic as possible.