White House Coronavirus Expert Dr. Anthony Fauci Says a Complete US Shutdown is ‘on the Table’ and Warns the Crisis Could Last Two Months 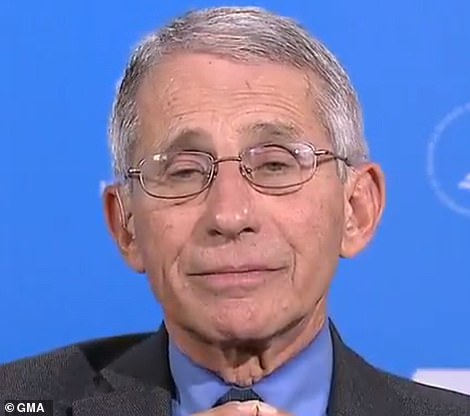 White House coronavirus expert Dr. Anthony Fauci said on Friday morning that the current state of crisis in the US would last for two months and that ‘it’s all on the table’ in terms of how much more severe things may become.

In a series of interviews with Good Morning America and CBS This Morning, Fauci gave his bleak assessment of what is still to come.

‘It’s certainly going to get worse before it gets better…there’s no doubt we have not peaked yet,’ he said.

Asked directly if America was heading towards a complete shutdown like China and Italy, he would not rule it out.

‘I’m not sure we’re going to get to that.

‘I think that would be really rather dramatic, but I can tell you that all things are on the table.

‘We just have to respond as things evolve over the days and the weeks,’ he said.

There has been a dramatic shift in tone from the government in the last several days.

At the start of the week, President Trump was advising Americans not to panic and even said the virus would ‘go away’.

He then shut the border to Europeans, and said on Thursday that even US citizens who test positive for the virus would not be allowed to come home.

Fauci’s prediction was that there will be at least another several weeks of the current mode of crisis, but that it could last up to two months.

‘It will be at least a matter of several weeks. It’s unpredictable, but if you look at historically how these things work, it will likely be anywhere from a few weeks to up to eight weeks.