How the World is Responding to Coronavirus: Towns on Lockdown, Mass-Gatherings Banned and Increased Border Checks to Battle Pandemic 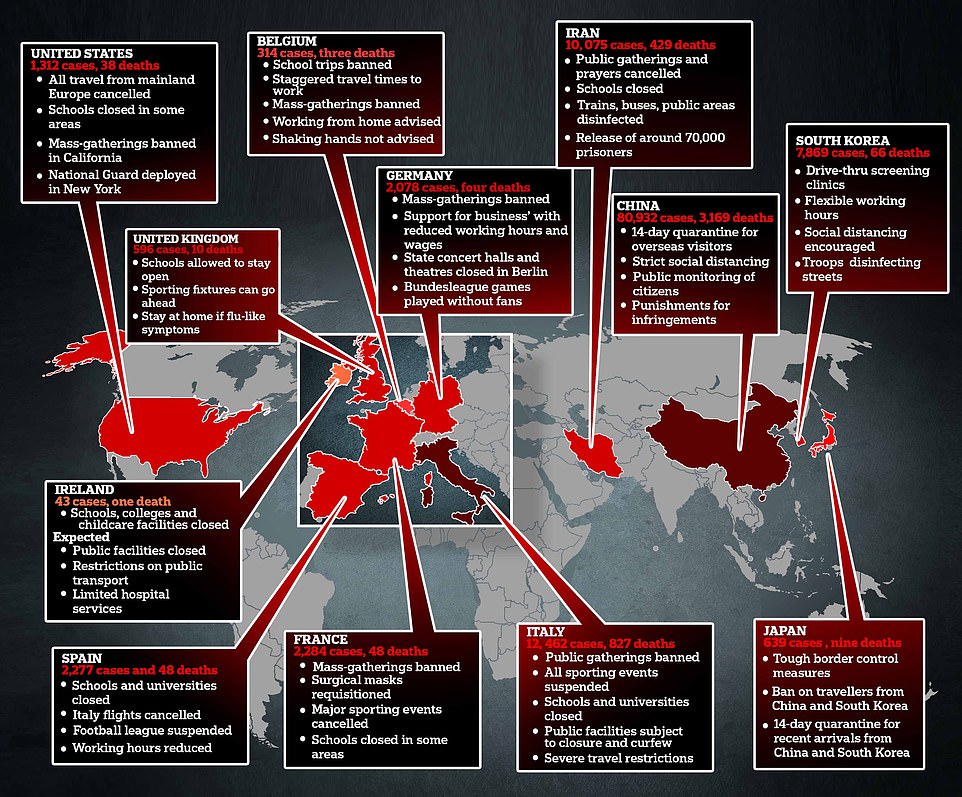 As the world remains in the grip of a deadly coronavirus pandemic, officials are questioning why Britain has failed to implement similar draconian measures seen in other countries.

While Italy is in total lockdown, America shuts its doors to travellers from Europe and the streets of China are desolate, the UK appears to be carrying on as normal.

Donald Trump dramatically escalated the US response to the pandemic, slapping a travel ban on continental Europe.

Prime Minister Boris Johnson today chaired an emergency Cobra committee where he declared the UK’s tactics will shift from ‘containing’ the killer disease to merely ‘delaying’ its inevitable spread.

Mr Johnson branded the coronavirus as the ‘worst public health crisis in a generation’ and warned that ‘many more’ will die.

But he said that the government would still not impose bans on sporting events and added that closing schools ‘could do more harm than good’.

With the NHS under mounting pressure, the UK’s chief medical officers and officials from the General Medical Council and NHS England have written to doctors saying they may need to work outside their usual area of expertise in the peak of an epidemic.

First Minister of Scotland Nicola Sturgeon, meanwhile, warned mass gatherings must be cancelled and said she was reviewing school closures.

Here, we look at how 13 countries around the world have responded to the virus.

On another day of frantic activity by politicians and health experts around the globe:

The PM chaired emergency Cobra committee with the UK’s tactics shifting from ‘containing’ the killer disease to merely ‘delaying’ its inevitable spread
No10 has dismissed suggestions they will emulate Ireland, which announced this morning that it will close all schools and colleges
Boris Johnson has so far refused to ban mass gatherings, or close schools
Mr Johnson asked those with a cold to self-quarantine, and urged vulnerable elderly people to stay indoors
To fight what is now officially a global pandemic, the Budget handed hospitals a £5billion fighting fund
Thousands of firms in the UK will be given a business rates holiday to help avert the risk of bankruptcy

Mounting pressure has built on the Government to move quickly to impose similar rules because it is feared the UK is heading the same direction as Italy, where 15,113 cases and 1,016 deaths have been confirmed.

Prime Minister Boris Johnson today held an emergency meeting where he declared the UK’s tactics will shift from ‘containing’ the killer disease to merely ‘delaying’ its inevitable spread.

He branded the coronavirus as the ‘worst public health crisis in a generation’ and warned that ‘many more’ people are going to die – but still held off implementing drastic measures.

He said: ‘At all stages we have been guided by the science. We will do the right thing at the right time.

‘This is more dangerous [than seasonal flu] and it’s going to spread further. And I must level with you and the British public: more families, many more families, are going to lose loved ones before their time.’

A total of 596 people have tested positive for coronavirus in the UK as of 9am on Thursday, up from 456 at the same point on Wednesday, the Department of Health said.

And two more patients have died in UK hospitals after testing positive for coronavirus, taking the total to 10, NHS England said.

Defending the UK’s approach to the pandemic, Mr Johnson added: ‘The measures that I have discussed today… staying at home if you think you have the symptoms, your whole household staying at home, looking after the elderly – making sure the elderly and vulnerable stay at home – these are the three most powerful defensive lines.’

‘We think it’s very important to maintain public trust and confidence in what we are doing, throughout this challenging time, always to be guided by the best possible scientific advice.’

He said that schools would remain open and added: ‘The scientific advice is that this could do more harm than good.

‘But we are keeping this under review and this could change as the disease spreads. Schools should only close if they are specifically advised to do so.’