Dispatches From Rome in the Time of Coronavirus

VATICAN CITY (RNS) — Since the fall of the fascist dictator Mussolini, the state in Italy has been a rather nebulous entity. Governments rise and fall — 61 since the end of the Second World War, but who’s counting? – yet things have kept on just fine.

Where the state was for the most part invisible, the Catholic Church has been the real, tangible reality in the country and nowhere more than Rome, where you can pass a dozen priests before seeing a single policeman.

But since the Italian government imposed drastic measures to contain the spread of the coronavirus on Monday (March 9), the situation has flipped.

Overnight, the state has made itself visible in full force while the Catholic Church is nowhere to be found. 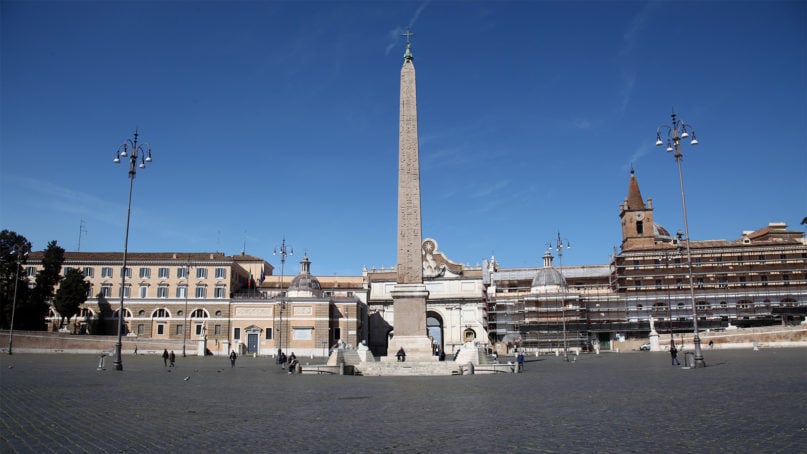 All of a sudden, I found myself printing government papers detailing my personal information and explaining my reason for leaving the house. Many friends and family discouraged me from going out, some even suggesting I was betraying my civic duty by exposing myself to the virus that has already claimed more than 800 victims from the over 10,000 infected in Italy.

In my reporting around the deserted city of Rome — the emptiness made even more striking by the sunny days of spring that would usually have drawn crowds to the piazzas and parks — I was stopped by the police three times. They asked for my documents and, after I explained that I am a journalist, allowed me to go on my way. Others were not so lucky. “Don’t stay out too long!” a policeman yelled to a young woman carrying a small pharmacy bag, who nodded before scurrying along.

The homeless are especially struggling. Police attempt to move them from their usual haunts. The ones I saw this morning seemed to respond with a “rage against the machine” mentality, yelling at anyone who came close or, in two cases, even purposefully coughing in the direction of unwanted strangers. 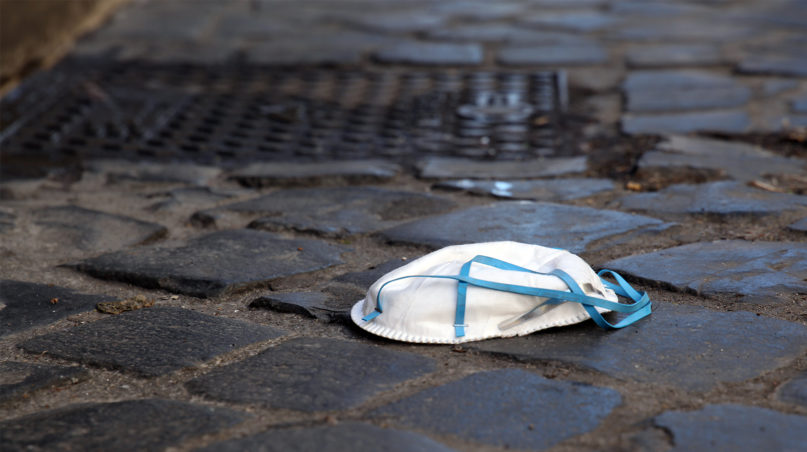 A surgical mask sits on the ground on March 12, 2020, in Rome. Photo by Federico Manzoni

Only pharmacies and grocery stores remain open, with long lines to enter, while everyone else has been forced to close up shop. (People in queues must stand 3 feet apart to maintain social distancing.) Public transportation is still functioning, but the barrier surrounding the driver is now sealed. Policemen and carabinieri are present at all intersections, and even a few military trucks patrol the Eternal City.

Italian Premier Giuseppe Conte brought the hammer down on Monday, making all of Italy a “red zone” and applying the world’s harshest containment measures so far outside of China. The motto is #Iorestoacasa, meaning “I stay home,” which has been repeated by celebrities on social media and placidly accepted by Italian citizens.

After all, a widely circulated meme says, our grandparents were asked to risk their lives in a global war. We have merely been asked to stay home.

Even the statue of Pasquino, located not too far from the Pantheon and usually covered with notes in Roman dialect criticizing governments and clergy, seems to be at a loss for words. The marble sentinel that’s for centuries voiced the Roman malcontent has fallen silent.