This week more than 500 evangelical students will hear Southern Baptist Convention President J.D. Greear and Yaqeen Institute founder Imam Omar Suleiman discuss how evangelicals and Muslims can find a way forward “in a time of unprecedented division and distrust.”

The conversation, hosted by the Veritas Forum, will be held Thursday (March 5) at North Carolina State University and is co-sponsored by the school’s Muslim Students Association, its Cru and InterVarsity clubs, and Neighborly Faith, an organization focused on transforming evangelicals’ attitudes toward Muslims.

“We’re trying to host what some might see as an unlikely conversation to be had in such a public forum, when we think about how isolated these communities have historically been from one another in our country, particularly since 9/11,” said Neighborly Faith director Kevin Singer, who is a doctoral student at the school and will moderate the discussion.

Most of the attendees will be deeply conservative evangelical students who likely have never held a conversation with a Muslim before and do not have Muslim friends, Singer noted.

“They probably don’t know how to have a mutually beneficial conversation with a Muslim in a way that feels faithful, so we’re hoping to show a model of charitable discourse that maintains conviction,” he said.

Being on a Southern campus, Singer said, the event may end up addressing some “cultural notions about Islam within the Christian faith and in this particular region.” 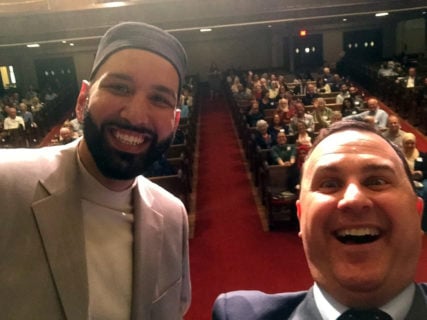 Suleiman told RNS he feels well-equipped to address such misconceptions: Having grown up in New Orleans and now living in Dallas, where he teaches Islamic studies at Southern Methodist University and often meets with evangelical leaders both in public and in private, Suleiman says he is intimately acquainted with Southern church life.

A prominent activist for civil rights and interfaith issues who is known for denouncing extremism, Suleiman has faced hostility from multiple sides, including threats from the Islamic State group. Commentators from the Christian right such as pastor Robert Jeffress have criticized him, as well.

So far, the imam said, the response to the event has been positive, with the exception of a stray social media comment.

Suleiman said he hopes the minority of Muslim students in the audience will glean something from the conversation, too.

“A lot of times we shy away from spaces where we think we won’t be welcomed in the fullness of ourselves as Muslims, but if we speak to the beautiful themes in our religion then that will resonate with people,” he said. “If we want to be bridge builders, we need to be consistent in our call for bridge building. We can’t only build bridges with people we’re comfortable with. We have to get over this apprehension that if we talk to people that we don’t agree with on everything, then we’ll lose what makes us unique as Muslims.”

Suleiman said such a public event, with a Muslim leader on stage beside a significant evangelical figure like Greear, sends a critical message of hope to both communities about the “possibility for dialogue.”